Outdoor exhibits are closed for the winter. Paths and trails are open to the public.

We take glass windows for granted but in 17th-century Maryland, only wealthier colonists could afford them. For many, window covers were cloth, oiled paper, or just shutters. And no one had screens to keep the mosquitoes out. Archaeology at St. Mary’s City has found many fragments of window glass and the thin lead stripes called cames, that held the glass in place. The most common form of windowpanes in the 1600s was diamond-shaped, although rectangular panes were also used. Here is an original 17th-century window on a house in the village of Chilton Cantelo, Somerset, England. The glass is not clear but has a green tint and the panes usually have imperfections from the manufacturing process 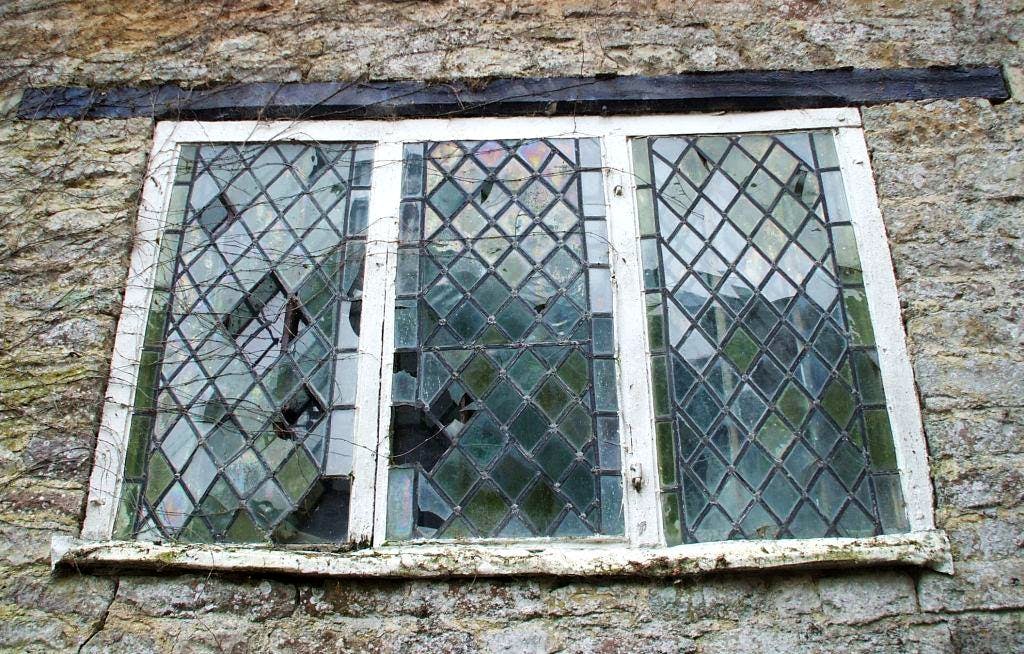 In 1978, I was given the task of analyzing the window-related artifacts from the St. John’s site. This was the first attempt to study 17th-century windows in Maryland. How does one find out the nature of the windows from small fragments? The most useful way is to first measure the angles. Even on broken specimens, you can generally tell the original edges and this is helped by the frequent appearance of a thin line of differential weathering where the lead cames had once held the glass. Diamond-shaped panes were typically cut into two sizes, called a “Square Quarrell” and a “Long Quarrell” in an early 18th-century builder’s dictionary by Richard Neve. The square form had angles of 77 and 102 degrees, while the long form was cut at 67- and 102-degree angles. Most of the measurable fragments from the second half of the 17th century displayed these angles, although a number of 90-degree specimens were also present. A large pit in the back yard of St. John’s filled in the 1690s held a plethora of window glass fragments and window leads. Analysis allowed me to reconstruct several of the windows, one of which is seen here: 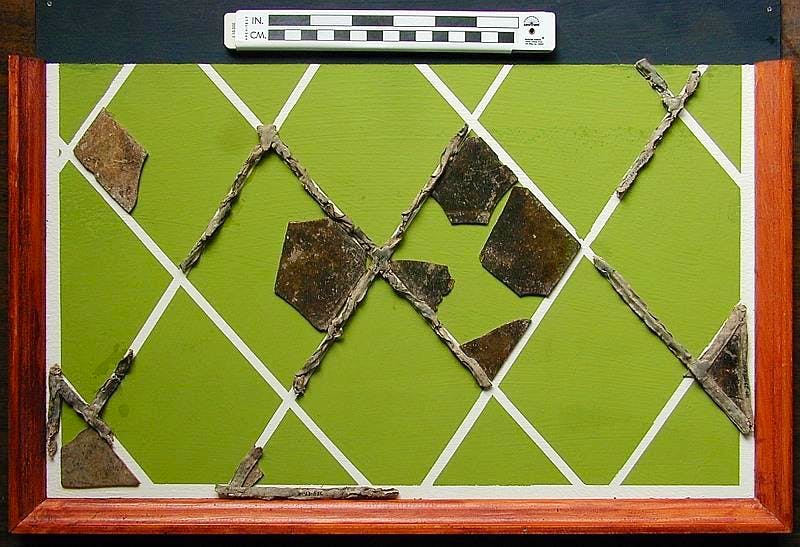 Similar window glass has been found at many St. Mary’s sites since then, including the Leonard Calvert House, Van Sweringen’s, the Chapel, and the Print House. Diamond-shaped panes were the most popular form in 17th-century Maryland.
But excavations at St. John’s also yielded a very different and earlier collection of window glass. This came from the fill of a dairy that had been built ca. 1640 for Mrs. Lewger on the back side of the house. Here is the dairy partially excavated, showing the fill layers and the completed excavation. Analysis of the artifacts indicates that the dairy was demolished when Dutch merchant Simon Overzee took over the property in 1654. He made a number of renovations apparently including the replacement of at least some of the windows because quantities of broken window glass were found in the dairy pit fill. This is somewhat unusual because the windows were only about 16 years old; normally they would much longer, as indicated by the ca. 1660 window seen above that is still in use in England. 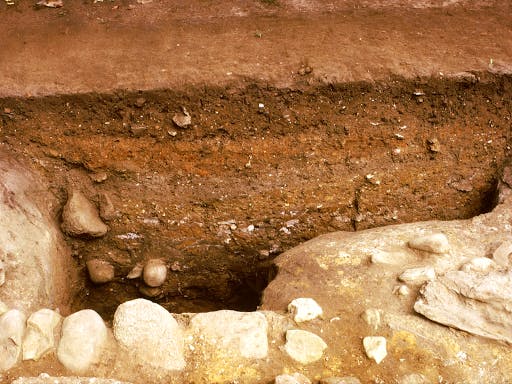 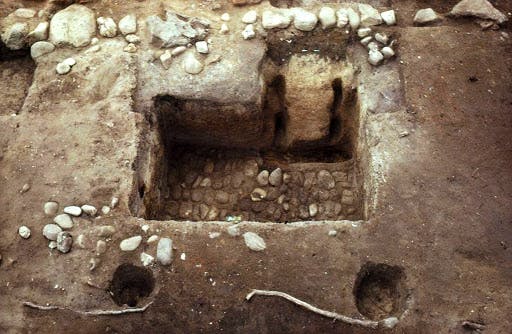 Dairy being excavated with the fill layers visible, and the completed excavation of the c. 1640 dairy

In measuring the glass fragments found in the dairy fill, I identified relatively few of the square and long quarrel angles that were so common in the later deposits. Instead, the glass fragments had unusual angles. After measuring all of them, I began trying to reassemble some of the panes. This was like a huge and complicated jigsaw puzzle with hundreds of pieces. It took days but revealed that at least some of the earliest windows at St. John’s had unusual shapes, including triangles and pentagons. Some of those panes are seen below. 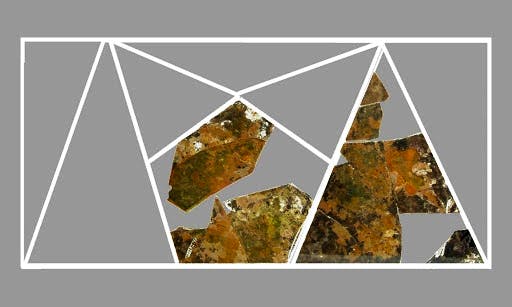 These are highly unusual for 17th-century windows. I then studied English and Dutch paintings and engravings as well a surviving glass windows in dwellings and churches to try and find similar window patterns but with no success.

St. John’s displayed windows containing pentagon-shaped panes and isosceles triangle panes. To try to better understand this, I turned to books on symbolism and numerology. The pentagon is seen as a symbol of divine grace and reflects the balance between the material and spiritual aspects of life. The number five stands for several things including the five wounds of Christ, the five senses, and the five virtues of Wisdom, Love, Truth, Goodness, and Justice. An equilateral triangle is commonly used as a symbol for the Holy Trinity, but the isosceles triangle can be referred to as the Golden Triangle because it reflects the proportions of the golden ratio in mathematics. Both forms were popular in the Renaissance and used in both art and architecture. It is very likely that John Lewger brought these as preassembled windows when he sailed for Maryland in 1637. He was a highly educated man, having received a B.A. and M.A degree from Trinity College, Oxford and then a Doctor of Divinity Degree from the same college. While there, he became friends with fellow student, Cecil Calvert. Lewger was an ordained Anglican minister who converted to Catholicism and was hired by Calvert. Lord Baltimore sent him to Maryland to be the first Secretary of State for the colony. Lewger built one of the finest houses in the infant colony with expensive finishes such as wood floors, plastered walls, and glazed windows. At least some of the windows displayed these unusually shaped panes that formed highly distinctive patterns not otherwise known in the Chesapeake region. Whether there was symbolism intended in these geometric forms in his windows cannot be determined.

They were replaced soon after the arrival of Simon Overzee, as is clearly indicated by the glass being thrown into the dairy around 1655. Overzee was Dutch and there is some suggestion that he was of the Jewish faith. As noted, the windows in St. John’s were about 16 years old when Overzee took over the property, not that old for such fenestration. There no doubt were other windows in the house that had the common diamond-shaped panes, but they do not seem to have been replaced by him. That appears to have been restricted to the ones with strange shapes, perhaps the ones that illuminated the parlor of the house. Did he find those more complicated windows that perhaps displayed Christian symbolism to be unacceptable? Or did the practical merchant merely prefer a more standard type of window? We will never know for sure. One guess based on all the measured angles as to the potential appearance of the parlor windows at St. John’s was rendered by the very talented artist Leslie Barker as seen here. There are many unknowns about St. John’s but one thing archaeology does tell us for certain is that in the 1640s, John Lewger’s dwelling of St. John’s displayed some windows that were very strange and perhaps unique in the American colonies 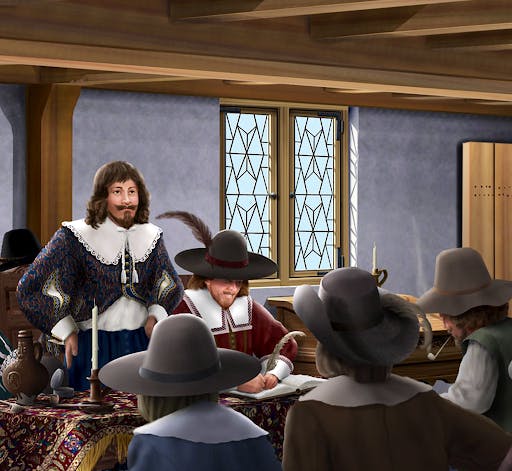