The Thames River holds a remarkable record of human life spanning thousands of years. Every day, some of this record is newly revealed by the action of tides. I had the very good fortune of experiencing the thrill of mudlarking from the Thames in 2016, under the guidance of the mudllarking queen – Lara Maiklem. Here I am as the tide is still going out in central London, not far from St. Paul’s Cathedral. 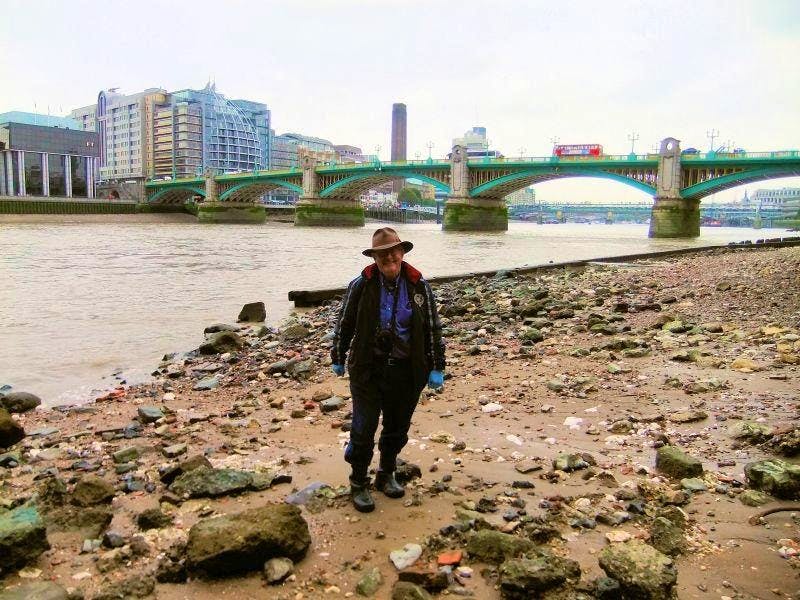 Many areas are literally paved with artifacts. They are moved and re-sorted, and new ones exposed each time the tide comes and goes. Over time, artifacts that came out perfectly preserved will degrade or be broken up by tidal action. Lara Maiklem knew that the goal was a collection of 17th- and 18th-century artifacts for the museum, so based upon her long experience, she led me to a zone where those artifacts are especially abundant. She was quite right, as this picture indicates; the surface is covered with 17th-century pottery and tobacco pipes. 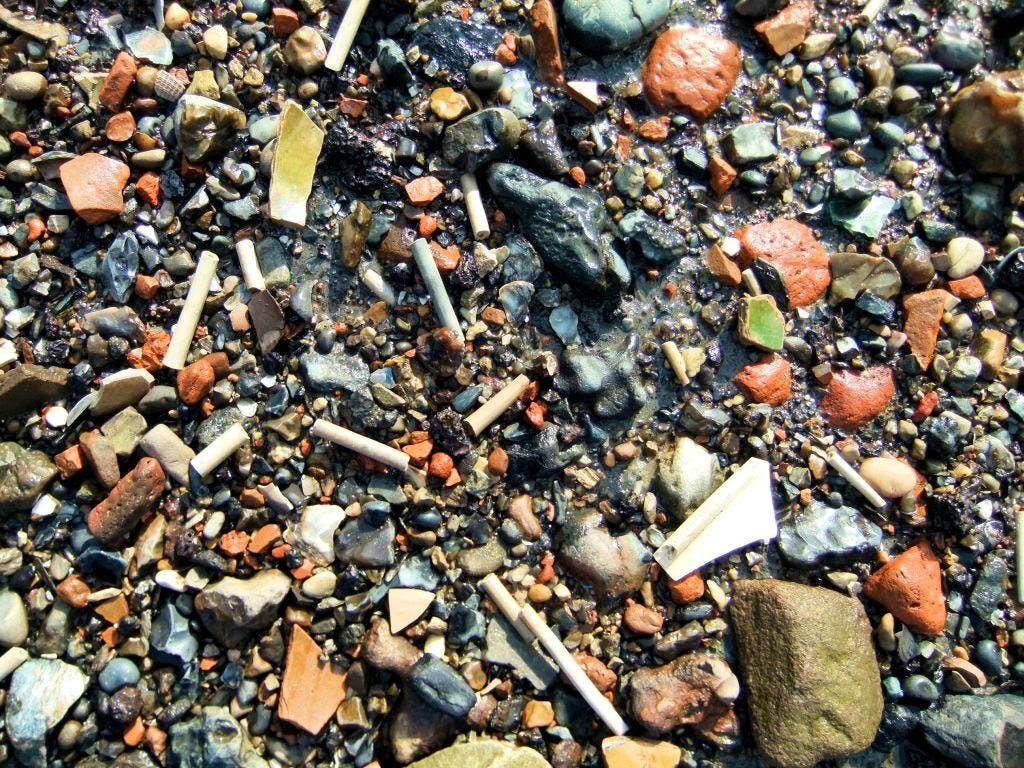 From the mudlarking, a valuable assemblage of London tobacco pipes was created for future Maryland researchers. Some of the complete pipe bowls are seen here. They date between ca. 1625 and ca. 1725. Having such pipes from a known origin allows archaeologists to better determine the origin of tobacco pipes found on Maryland sites. 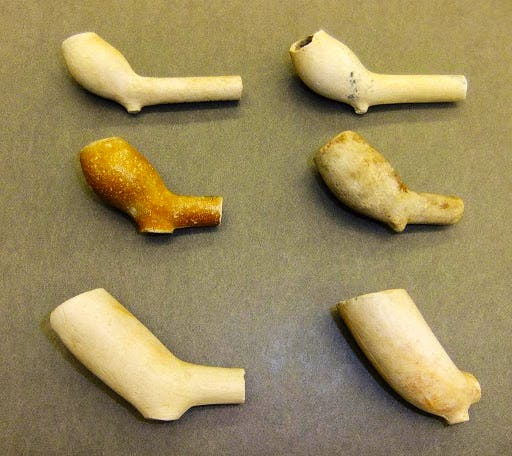 But Londoners have dumped into the Thames for several thousand years and the river bottom mixes up artifacts from many times. Only about 10 feet away from this 17th-century artifact cluster was the base of a 2,000 year old Roman Samian ware vessel. 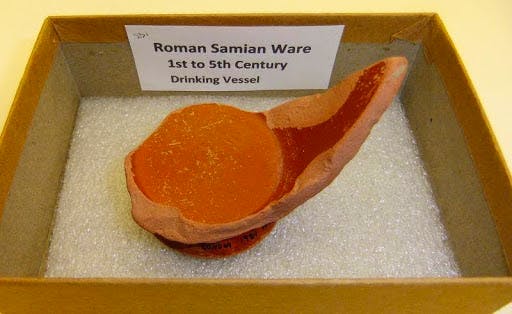 Many types of medieval and later pottery are found and a number of these have relevance to Maryland. One type of pottery brought by the earliest settlers had been made in the London area since late Medieval times. Called Border Ware, it is often green in color from copper added to the lead glaze, although others are yellow with a plain lead glaze. The green is sometimes called Tudor Green because of its popularity during the reigns of the Tudors especially Henry VIII, Edward, and Queen Elizabeth. Maryland settlers continued to import it during the first decades of the colony. Having known London Border Ware in the collection can help us better distinguish it from similar looking Dutch pottery. 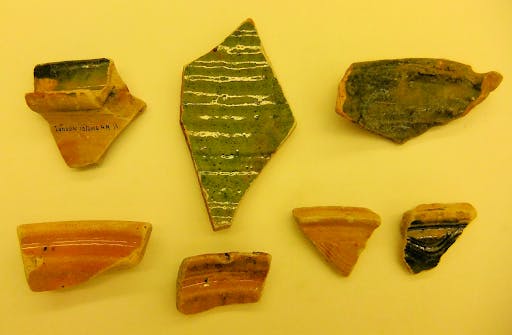 Then there is a mystery pottery. Back in the late 1970s, I was given the job of analyzing the thousands of pottery sherds found at the St. John’s site. Some were identifiable but many others had no known origin. I defined a number of pottery types by their characteristics in the hope they could one day be traced to an origin. One of these was what I called Red Sandy Ware. It was a coarse utility pottery with a red/orange color, a sandy clay, and a rich brown lead glazed that when it was scratched had a golden color. Very distinctive. We had a number of vessels of this ware but no one I showed it too could tell me where it was made. The London mudlarking finally solved it. While collecting, I started finding sherds that looked somehow familiar. Museum of London specialist Jackie Pierce identified them for me as pottery made in the London area and called London Post-Medieval Redware. Upon return to Maryland and comparing the sherds, it became immediately apparent that this is what Red Sandy ware really is. This finding shows that London goods were even more important in early Maryland than we thought. 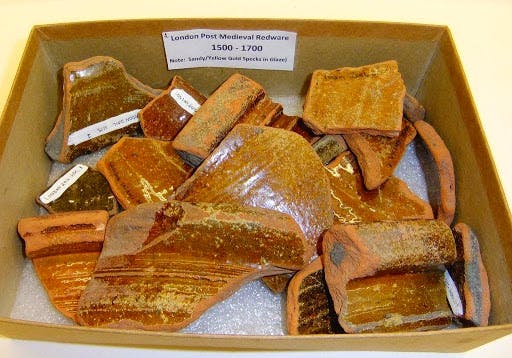 The smallest finds were straight pins, most clustered together in one area. These are of 16th- and 17th-century dates and still could be used for sewing. 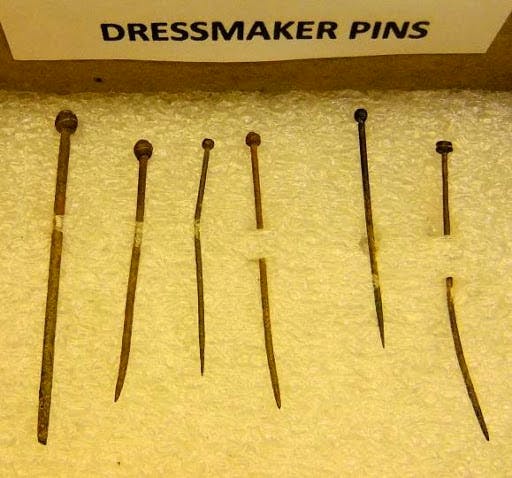 Sewing pins from the foreshore of London

The muddy Thames bottom also covers items that would otherwise not survive. This includes wooden artifacts, clothing, seeds and leather. Lara spotted this artifact partially expose in the mud. As you can tell, it is the sole of a woman’s shoe, around 200 years old. Because leather requires conservation and that was not feasible, we reburied it in the mud with the hope that it will survive centuries longer. 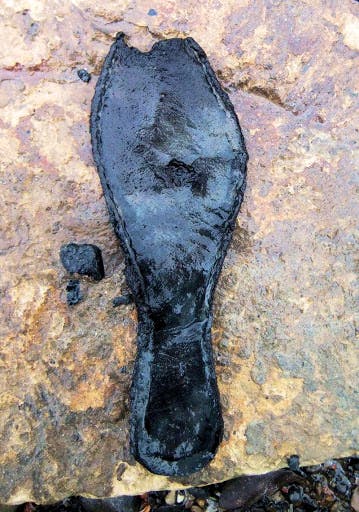 The most evocative artifact found during the mudlarking episodes is a small signet seal of brass, used to impress one’s personal mark in wax on letters and official documents. It bears the image of a pig. We will never know who it belonged to or why they wanted to use a pig, but, like the shoe, it is a very personal object and perhaps the only physical evidence a person’s life to survive. Because of the uniqueness of the seal, it is now in a collection in England, as it is not significant for St. Mary’s City research. But I still wonder who it belonged to. 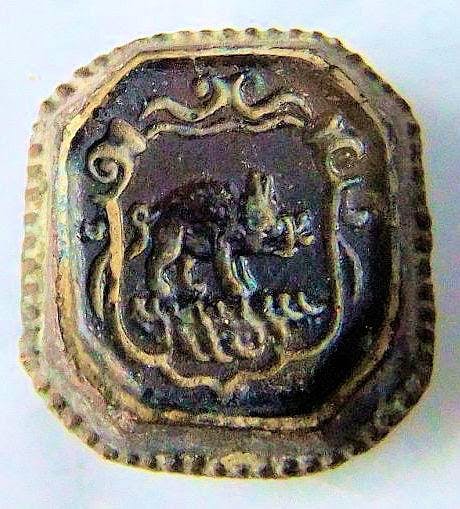