Mystery of the Swedish King

One of the least expected artfacts discovered during the archaeology at St. Mary’s City is a small medallion bearing the image of the great Swedish King Gustavas Adolphus. Archaeologists recovered it at the Van Sweringen site which began as the colonial records office in 1664 and in 1677 became Garrett Van Sweringen’s “Private Lodging House” to entertain the Maryand’s elite.

A portrait of the monarch faces the viewer on the front, and a carefully placed circular hole was drilled just above his head so that the medal could be worn around the neck on a string. Iron corrosion about the hole, especially on the back side, suggests that an iron loop ran through the hole so that when it was suspended on a string, the metal would lay flat on the chest or garment. This was clearly a personal object that had meaning for the wearer. 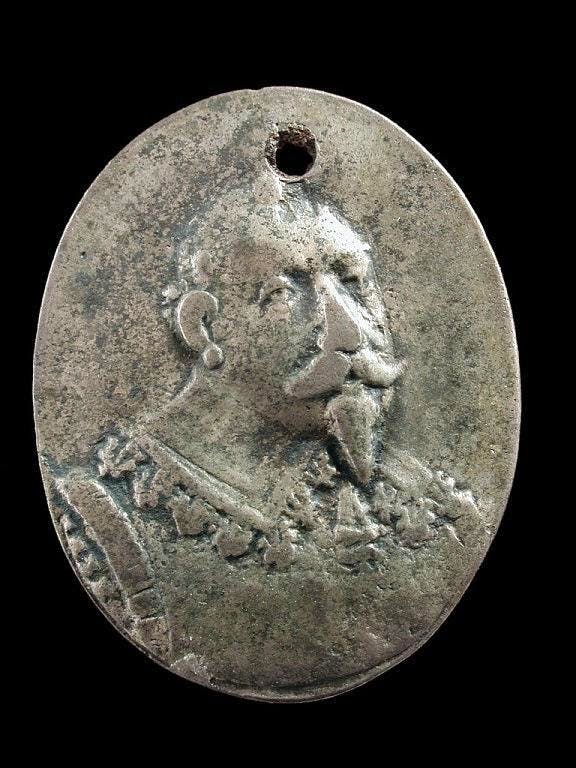 The reverse side has a legend in Latin and symbolic figures of a sword and septer, crossed by a snake. The legend is ENSEM GRADIVVS SCEPTRUM THEMIS IPSA GVBERNAT which Latin scholar Linda Hall at St. Mary’s College of Maryland translated for me. The motto reads: Gradivus Governs the Sword, Themis Herself Governs the Scepter. Gradivus is a term for he who walks in battle, indicating Mars, the god of war and Themis was the goddess of justice. Themis is also defined as the law of nature, she of good counsel who represented law, custom and good order. The motto probably denotes the combination of remarkable military skills and just governance of Swedish king Gustavus Adolphus the Great. The sword and scepter support the motto and the snake is a heraldic symbol of wisdom. 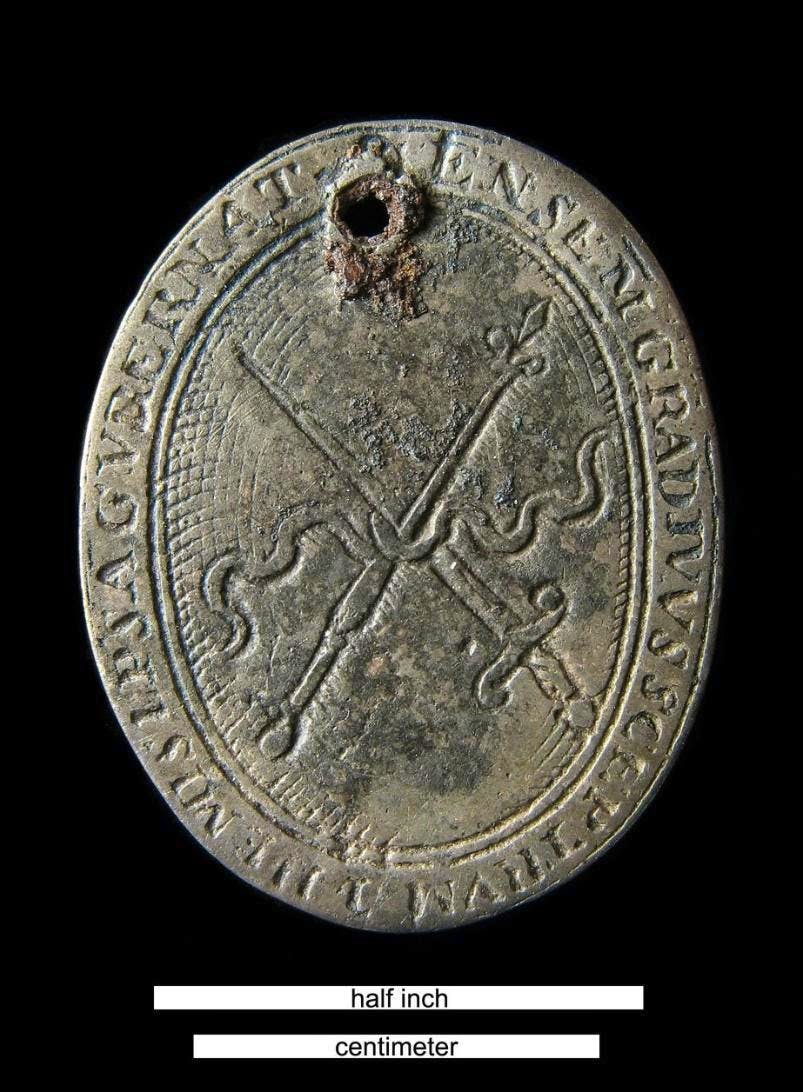 Gustavus Adolphus (1594-1632) ruled Sweden for 21 years, during which time he improved the government and developed one of the greatest military powers in Europe. Adolphus is regarded as one of the finest military commanders, who championed the Lutheran cause in the 30 Years War and became an esteemed figure among all Protestants. His death in battle in 1632 was a great loss but his military ideas and efficient government allowed Sweden to remain a major European power. He became a figure of great pride for Swedes, which led to the production of commemorative medals. Consultation with Eva Wisehn, Senior Curator of the Myntkabinettet (the Royal Coin Cabinet) in Stockholm, indicates the St. Mary’s medallion was struck after the king’s death and it was probably made in Germany. There are about 100 different versions of the medallion, they are made in different types of medal and they are often found in Europe, especially Germany. She concludes that it was not a coin but intended as “a token of remembrance of the hero king.” The hole for suspension on the St. Mary’s specimen supports that interpretation. To her knowledge, it is the oldest representation of the great Swedish king found in North America. It seems probable that a Swede carried this medal to America as a personal possession. So how did it get to St. Mary’s City?

Althugh Maryland was originally settled by English and Irish, events soon caused and other nationalilties to come to the colony. New Sweden was established on Delaware Bay in 1638 and flourished until the Dutch reduced the colony in 1655. Some Swedes (and Finns) began seeing Maryland a better option. When the English captured the Dutch colony on the Delaware in 1664, more Swedes and Dutch migrated to Maryland. Lord Baltimore encouraged this for in the 1650s, he declared that “… Knowe yee that wee willing to give due Encouragement to the Subjects of … the Crowne of Sweeden” to come to Maryland. Some of the best evidence for their presence is found in land patents and petitions for a form of citizenship called denization. Sixteen applied in 1661 and 12 more asked for full naturalization between 1669 and 1674. So there were Swedes and allied Finns in Maryland, but how did the medalion of the famed Swedish king end up at the Van Sweringen site?

Garrett Van Sweringen had interacted with the Swedes along Delaware in his post of deputy commander of the Dutch New Amstel colony. But as a Catholic living in Maryland, he is unlikely to have had an interest in wearing a memento of the esteemed Protestant King. Also, Van Sweringen was relatively late coming to that site. He acquired it in 1677 after the new Brick Statehouse was finished and converted it into the elegant lodging house we think of. But what we call the Van Sweringen site actually began in 1664 when the government built a structure there to serve as a meeting place and records office. That function continued until 1676. Over that twelve-year period, numerous colonists would have come to the office for land grants and to file documents such as petitions. Rather than the medallion being associated with Van Sweringen, it seems most likely that it was lost by a Swedish immigrant who came to the office to conduct official business.This might include the petitions for denization and naturalization that were presented between the early 1660s and 1674.

Although a unique artifact, this medallion bears strong testimony to the presence of Swedes in the colony of Maryland. Although most settlers were of British origin, a substantial number came from other countries during the 17th century, attracted by the same opportunity and religious freedom that drew others. Together, they created a culturally and religious diverse society that was unparalled at the time in North America. This is a striking case of a small artifact telling part of a larger and significant story.