Archaeological research needs type collections of known artifacts to help identify the unknown ones. This is true for skeletons, tobacco pipes, and ceramics. HSMC has developed some of these but lacks others. In 2016, an opportunity arose to make an important addition – mudlarking along the Thames River in London. Mudlarking is the word originally used to describe poor children and adults who would go along the exposed riverbed at low tide, collecting coal, nails, lost coins, or any other items of value. Today, mudlarking refers to people who search the rive bottom for objects of antiquity. I was contacted by the queen of modern mudlarkers – Lara Maiklem – and took the opportunity to ask for her help. Could she aid me in creating a comparative collection of London artifacts for Maryland archaeologists? She said yes and we met along the Thames shore in October of 2016. 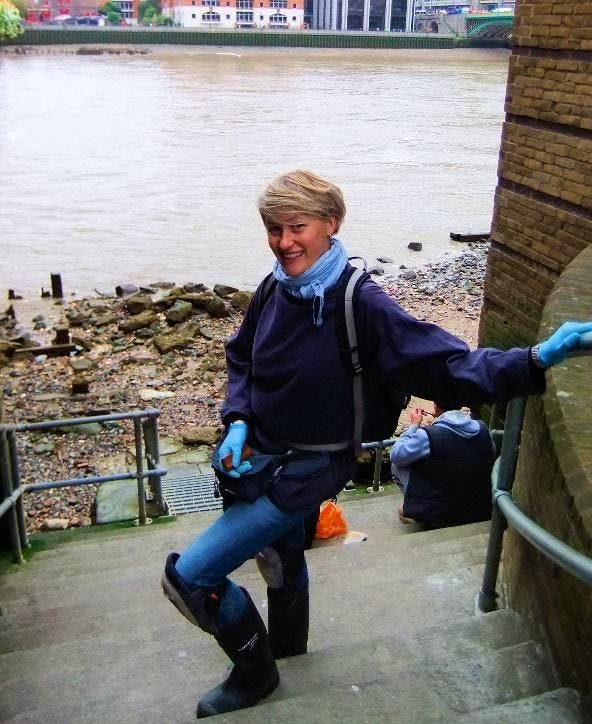 As she explained, Londoners have dumped their trash into the Thames since Roman times, producing huge deposits of artifacts that became buried in the river mud. The Thames is an estuary like the Chesapeake Bay and Potomac River, but it can have tides from 15 up to 23 feet. In comparison, the daily tidal range on the Potomac is seldom above 3 feet. And the Thames tide can move at a speed of five miles an hour. This large tidal range means that each day, large sections of the bottom near the shores are scoured by the advancing water and then left exposed for hours. Those are the times newly revealed artifacts from centuries past may be found.

Once you step on to the foreshore in central London, artifacts are under your feet. This picture shows one area covered with bones, tobacco pipe stems, ceramics, flints and other materials. 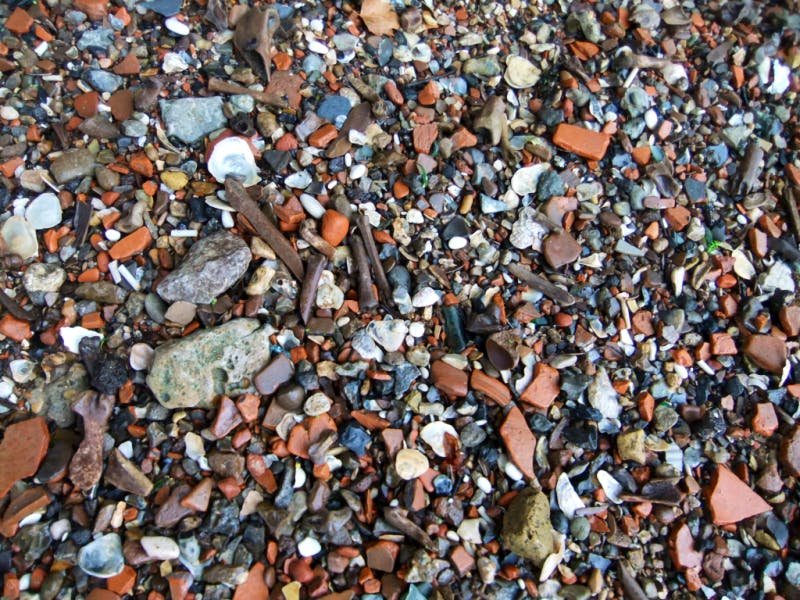 The tidal action tends to concentrate some items like small pins or bones. Here is a group of bones dating between medieval and 17th century times to the early 1800s, all washed out by the tide and clumped together. The mud and wet environment provide excellent preservation of many materials. 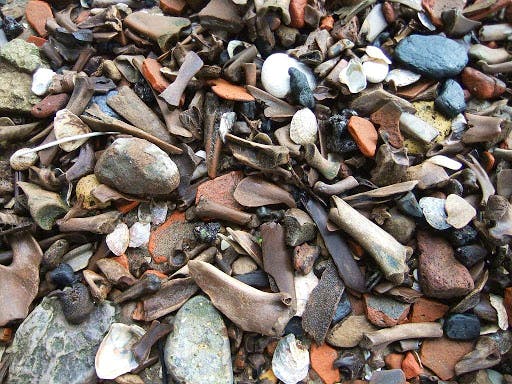 Mudlarking does require training your eye to see things. Finding objects can be a real challenge and it took me time to begin recognizing notable artifacts. Take this picture. Lara told me there was something to find in that area, but I could not see it at first. Can you? It is a complete tobacco pipe bowl dating to the 1660s or 1670s near the center of the image. 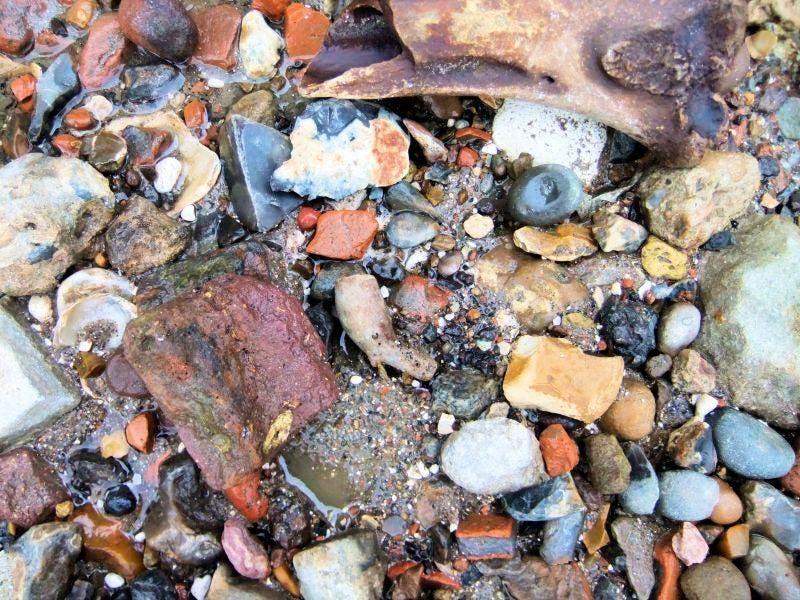 Here is the pipe itself, now in the HSMC collection. 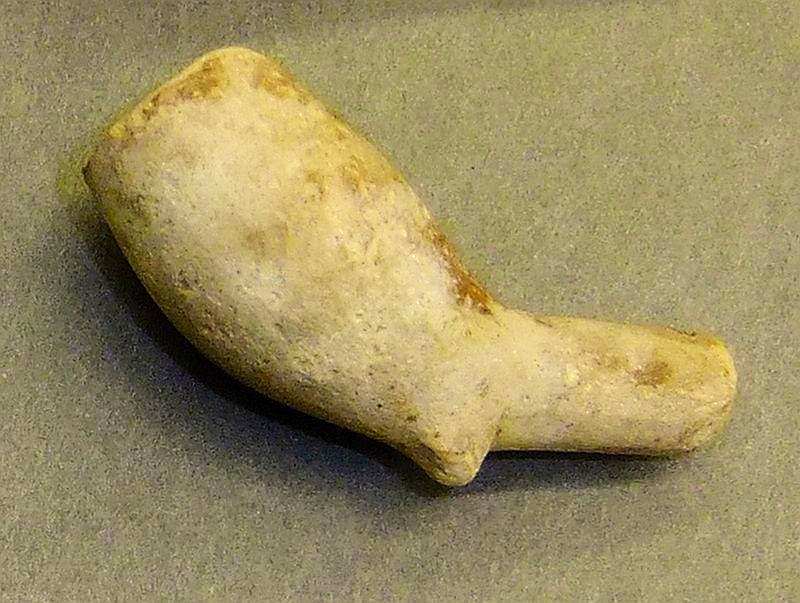 I was fortunate that Lara gave me essential details and rules about mudlarking. Some areas have deep mud that can trap a person. And Britain has a rule that any “treasure” found (precious metals, rare objects, etc.) must be submitted for evaluation by authorities for recording and possible acquisition. I found no treasure. And there are some areas where no one is permitted to collect or even enter. One is the shore along the Tower of London. Another is Queenhithe seen here. It was a Roman dock area, later developed by the Saxon King Alfred the Great in the 700s, and it became a major docking facility for later London. Today, it is the only ancient dock area surviving in London and Lara calls it “the grande dame of the tidal Thames.” At low tide, its surface is covered with materials from all ages, very alluring, but I followed the rules. 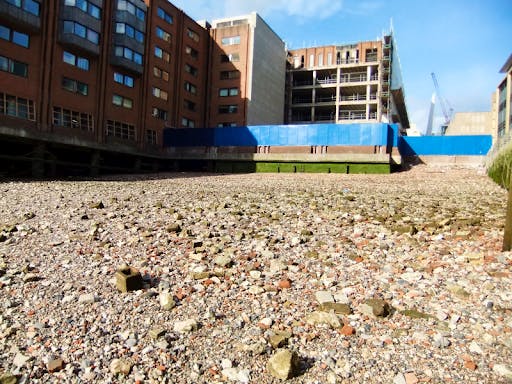 Several tides worth of exploration in London yielded hundreds of artifacts for the St. Mary’s City Comparative Collection. After checking with the Museum of London to ensure there was no treasure, these were brought back to Maryland, where they were washed, labeled, organized, and permanently curated at the laboratory, as seen here, with the outstanding assistance of volunteer Isabel Tonkavitch. 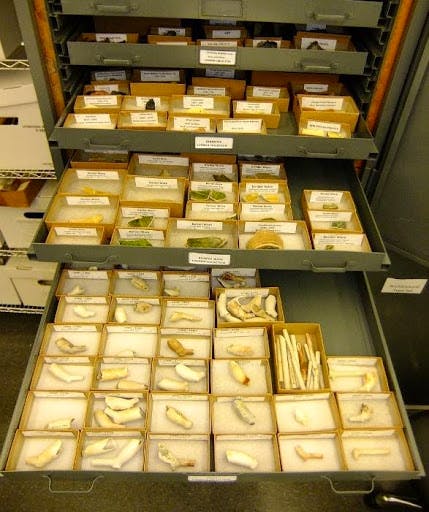 More of what was found will be discussed in a later posting but I want to recommend a recent volume about the art, discoveries, and excitement of mudlarking along the Thames. It is Lara Maiklem’s new book Mudlark: In Search of London’s Past Along the River Thames (2019). Beautifully written and filled with fascinating stories and memorable artifacts, it is highly recommended for those with an interest in the discovery of the past. 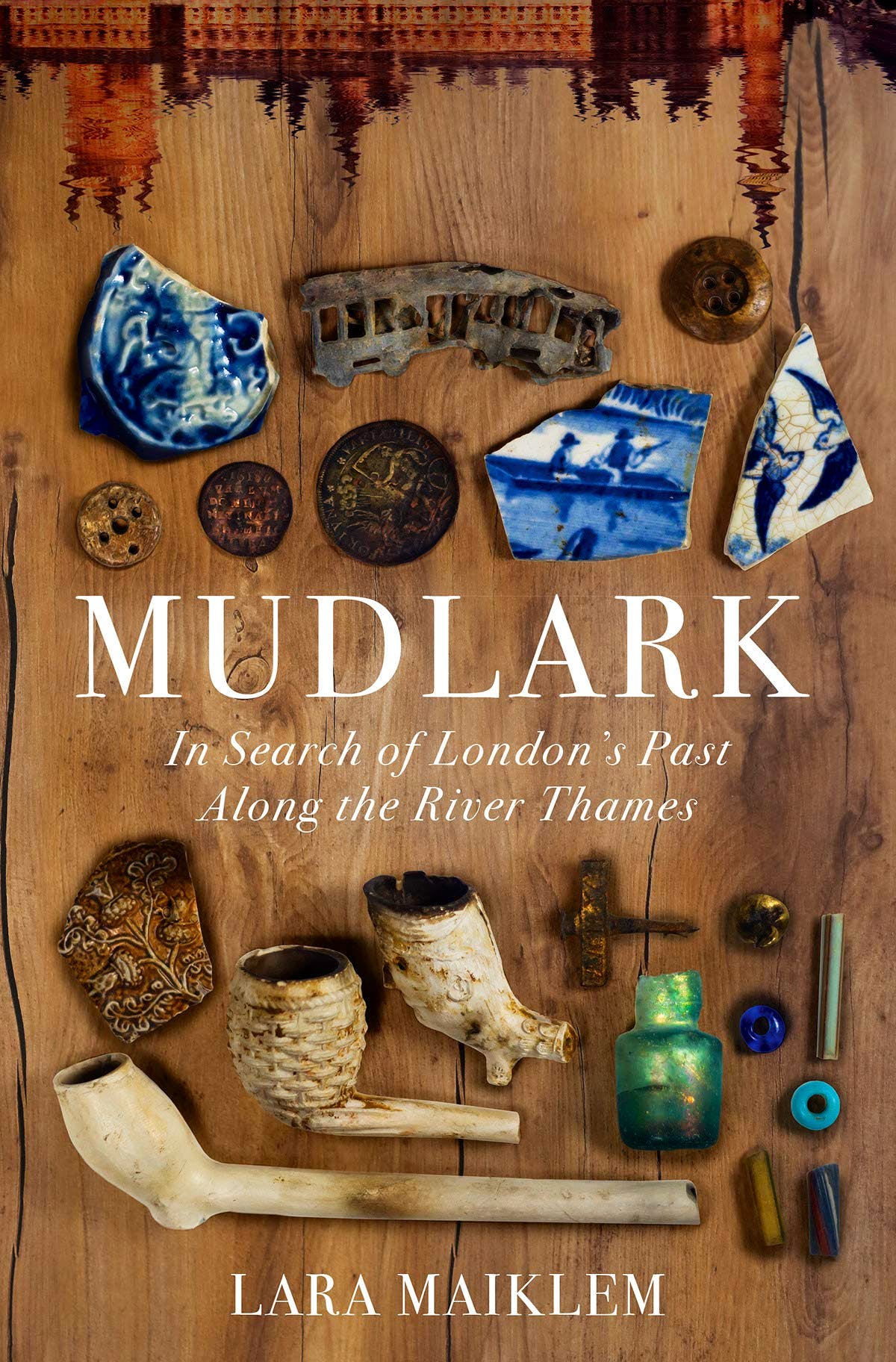