Few letters from 17th-century Maryland survive and nearly all of these are from elite men. But detective work by English historian Ruth Crook in 2014 discovered a previously unknown letter in a London Archive. It was written by Ann Trueman, the wife of physician and planter James Truman. They immigrated to Maryland in 1667. The recipient was a cousin of theirs in England. Ann and her brother Arthur Storer grew up with and were friends of Isaac Newton. From their plantation along the Patuxent River, Storer became America’s first astronomer, providing important observations Newton used in his pivotal development of the laws of motion. Storer’s amazing story will be the subject of a later posting. But what makes Ann Truman’s document of special significance is that it is the only surviving letter written by a “planter’s wife” in early Maryland, offering a unique personal view of living in the colony. The original letter is seen here, followed by a transcription given me by Ruth Crook. 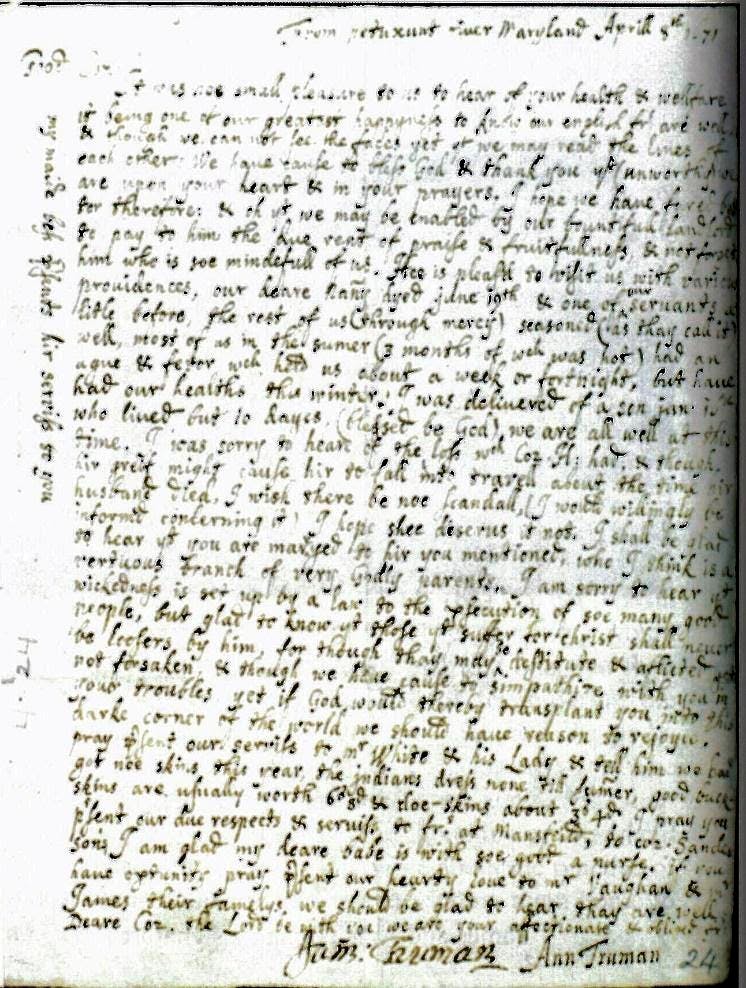 Good Coz:
It was noe small pleasure to us to hear of your health & welfare it being one of our greatest happyness to know our english fr [friends] are well, & though we can not see the faces yet Þt [that] we may read the lines of each other: We have cause to bless God & thank you Þt [that] (unworthy) we are upon your heart & in your prayers, I hope we have fared better therefore: & oh Þt [that] we may be enabled by our bountifull landlord to pay to him the due rent of praise and fruitfullness, & not forget him who is soe mindefull of us. Hee is pleasd to visit us with various providences, our deare Nanny dyed june i9th & one of our servants a litle before, the rest of us (through mercy) seasoned (as thay call it) well, most of us in the sumer (3 months of wch was hot) had an ague & fevor wch held us about a week or fortnight, but have had our healths this winter. I was delivered of a son jan. i6th who lived but 10 dayes, (blessed be God) we are all well at this time. I was sorry to heare of the loss wch Coz H: had, & though hir greif might cause hir to fall into travell about the time hir husband died, I wish there be noe scandall, (I would willingly be informed concerning it) I hope shee diservs it not. I shall be glad to hear that you are marryed to hir you mentioned, who I think is a vertuous branch of very Godly parents. I am sorry to hear that wickedness is set up by law to the persecution of soe many good people, but glad to know that those that suffer for Christ shall never be loosers by him, for though thay may be destitute and aflicted yet not forsaken, & though we have cause to simpathize with you in your troubles yet if God would thereby transplant you into this darke corner of the world we should have reason to rejoyce. Pray present our service to Mr White & his Lady & tell him we had got noe skins this year, the indians dress none till summer, good buck-skins are usually worth 6s 8d & doe-skins about 3s 4d. I pray you present our due respects & serviss to frs. [friends] at Mansfeild, to coz. Sanderson’s, I am glad my deare babe is with soe good a nurse. if you have optunity, pray present our hearty love to mr Vaughan & mr James & their famelys. we should be glad to hear thay are well.
Deare Coz. the Lord be with you we are your affectionate and obliged fr: [friend]

The Trumans were Protestant Independents in religion, a persecuted group in England that refused to conform to the Anglican faith. It is likely that Maryland’s freedom of religion was an important factor in their coming to the colony. In the letter, Ann specifically notes the religious struggles in England with “I am sorry to hear that wickedness is set up by law to the persecution of soe many good people, but glad to know that those that suffer for Christ shall never be loosers by him….“ As you will have noted, it is clear throughout the letter that faith had a central role in her life. Ann also mentions “my deare babe,” which is a young daughter she had to leave behind in England when they sailed for Maryland, another indication of how immigration could divide families, even parents and young children. But it is her relation of the tragic deaths that characterized Early Maryland that is perhaps the most compelling aspect of her letter:

“our deare Nanny dyed june i9th & one of our servants a litle before, the rest of us (through mercy) seasoned (as thay call it) well, most of us in the sumer (3 months of wch was hot) had an ague & fevor wch held us about a week or fortnight, but have had our healths this winter. I was delivered of a son jan. i6th who lived but 10 dayes”.

She describes two servant deaths in June, the family endured seasoning, and in the summer suffered with “ague & fever” (probably malaria) and then the loss of her newborn son. Reading about mortality rates of colonists compiled by historians does not convey the frequent hardship of sickness and death early Maryland settlers suffered as profoundly as does this single letter. To add a further detail, the co-signer of the letter, her husband James Truman, was dead within a year of its composition. This document is powerful direct testimony that building the colony of Maryland involved much sickness and a tremendous sacrifice of life by men, women, and children.

Through all this, Ann (Storer) Truman was a survivor. She remarried, had three more children, and lived until 1714 when she was 74 years old, an exceptional age in the colony. Crook notes that Ann wrote the number 92 on the letter, suggesting that she was a prolific correspondent. We can only hope that future searches in other obscure British archives will reveal a few more of her letters from Maryland, letters that will yield equally fascinating insights about 17th-century colonial life.