The Most Remarkable Rescue of Early Maryland History

If you ask historians what are the most important sources of information about early Maryland, what would they say? First on the list would undoubtedly be the government records of the colony. It is remarkable that so much of the original documents of the legislature, court cases, estate inventories, land records, and other items have survived at Annapolis. Many historians agree that Maryland has the best set of colonial documents of any of the original colonies. Beginning in 1882, the Maryland Historical Society (MDHS) with some assistance from the State worked to preserve and transcribe many of these colonial documents, publishing them in an invaluable series of volumes called the Archives of Maryland. You can access these on line today at http://aomol.msa.maryland.gov/html/volumes.html.

But the second source of insight about the early colony is less well known to the public and only survived by an amazing sequence of good luck. This article tells that story, the story of the Calvert Family papers. It was fully laid out by a former HSMC archaeologist Richard J. Cox in a 1989 catalogue of the papers seen here. 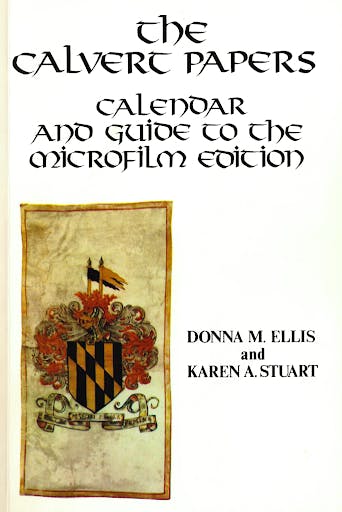 After the American Revolution, contact between Maryland and the family of the Lords Baltimore in England largely ended. Without doubt, many valuable documents about the colony and family activities were in possession of the Calvert descendants but no effort was made to obtain them for the state of Maryland. Indeed, knowledge of their whereabouts was totally lost.

In 1839, Marylander John Alexander was visiting the British Museum and saw “two considerable chests marked CALVERT PAPERS” and he assumed they were being acquired. Two decades later, on a return visit, Alexander asked to see them but was told they were not in the Museum’s collection. Members of the MDHS remembered this story and in 1886, the society placed an advertisement in a British journal seeking them. A reply was received from a Colonial Frederick Henry Harford, a descendant of the last Lord Baltimore, Henry Harford. Harford had been a British Army officer but according to one account, he was “entirely without family pride and has never developed any historical bump” and his goal in answering the ad was purely monetary. An Englishman Winslow Jones was hired by the society to inspect the collection and he found them in utter confusion and stored in an old chest that

“has for some years been in an old orangery now used as a potting house & and for garden purposes, and some signs of damp are on a few of the paper, so that, if the chest should remain for some years longer in its present place, the papers may be seriously injured”.

A visit a few months later by Maryland historian David Randall indicated that the papers were of great significance and he compiled a list of many of them. He was also given an ominous piece of information by Col. Harford that another group of the papers had been buried in a garbage heap near Harford’s house.

This news spurred the MDHS into swift action to try and acquire the papers. Society member John W. M. Lee sailed to England in 1888 and began negotiations with Harford and his lawyers. After haggling over the price, they were acquired by the society on 29 April 1888 for the sum of £225 and were immediately shipped to Baltimore. The entire cost of the acquisition including travel and shipping came to $1,590, virtually all of which were in contributions by members of MDHS. This was an amazing low purchase price, equivalent in today’s dollars to only $44,800. The papers were sorted, catalogued and became the “prize collection” of the historical society. They contained Cecil Calvert’s instructions for the founding of Maryland, the original hand written report by Father Andrew White entitled “A Briefe relation of a Voyage unto Maryland”, correspondence from and to the Lords Baltimore, the original Patent of Nobility making George Calvert a baron, his will and probate inventory, land grants, records of quit rents, court cases, legislative records, and 300 documents about the long lasting dispute over Maryland’s and Pennsylvania’s boundary line. This was an acquisition of unparalleled significance for Maryland history. The 1624 Patent of Nobility is an especially intricate and beautifully document, here is the royal crest of King James I, who made George Calvert a baron, which appears along the border of the Patent.

But what about the buried papers? During an 1889 visit with Col. Harford by society member Julian LeRoy White, Harford confirmed that that about eight years before, three or four cases of papers “were much in the way and one day the butler said to him what shall we do with these? Burn them, he answered, and thought no more about it.” Some months later, “he happened to ask the butler about the papers, and was told that they had been buried in a rubbish heap”. An interview with the butler provided a detail that “they were buried without any chest or other protection…so there is great doubt whether there will be anything left”. White got permission from Harford to search for this cache of Calvert documents and dug trenches in August of 1889.

“We dug all that day through all that part of the heap which might possibly, according to the butler, contain the Papers. We went down to water almost, and found nothing except some enormous worms…If there were papers there the damp could not have failed to destroy them.”

Thus ended the first and only “archaeological excavation” for Early Maryland documents ever conducted. Missing from the Calvert Papers are items such the original Charters of Avalon and Maryland, which would have been carefully protected possessions. Only 18th-century copies are present. And only a few letters reporting affairs in Newfoundland, Ireland or Maryland survive in the MDHS Calvert Papers. These and many other significant and unique documents were probably in the second chest and destroyed by the callous orders of Col. Harford. We can only wish that a British Museum curator had had the foresight in 1839 to acquire the papers.

Nevertheless, the surviving Calvert Papers represent a treasure trove of history. Some of the documents were transcribed and published in the late 1800s as The Calvert Papers by the Society. Among them are many impressive items such as the royal wax seals of Queen Elizabeth 1 and King Charles I, royal decrees and land grants, and the previously noted 1624 Patent of Nobility making George Calvert the Baron of Baltimore. In 2009, the MDHS generously loaned it for display at St. Mary’s City on the 375th anniversary of Maryland’s founding, as seen here with the now MDHS President Mark Letzer. The image of King James is prominent at the top of the Patent and is also seen below. 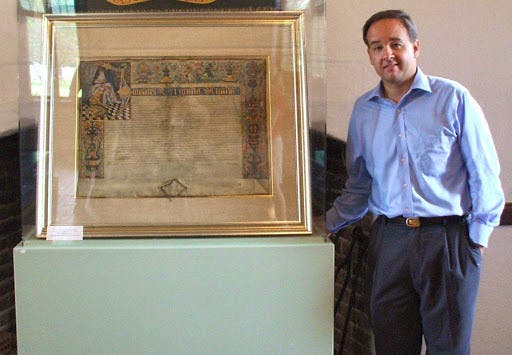 George Calvert’s 1624 Patent of Nobility on display at St. Mary’s City in 2009, being interpreted by
MDHS President and CEO Mark B. Letzer. 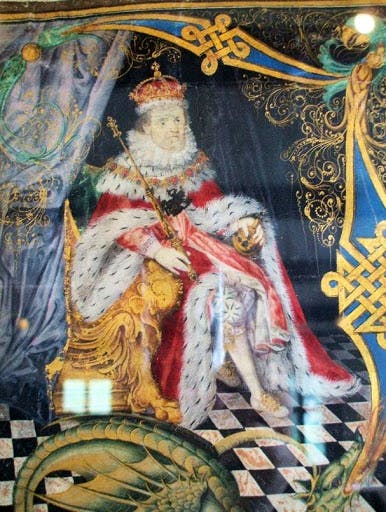 King James I on Calvert’s 1624 Patent of Nobility, owned by the Maryland Historical Society

Our knowledge of early Maryland would be greatly impoverished without the diligent efforts and generosity of 19th-century Marylanders and the Maryland Historical Society to secure for posterity this incredibly important collection named The Calvert Papers. They are a core source of history about early Maryland and many of the documents are still not fully analyzed for what they can reveal about the colony’s founding family, something I hope to change. These records are truly of irreplaceable historical value and are indeed the “prize” Maryland collection for which all students of the colony of Maryland are grateful. Nevertheless, we will always be left wondering what equally fascinating documents were buried and lost so long ago in that English rubbish pile.

Reference:
Cox, Richard J.
1989 A History of the Calvert Papers. In The Calvert Papers: Calendar and Guide to the Microfilm Collection. Edited by Donna Ellis and Karen Stuart, Pp. 1-16. The Maryland Historical Society, Baltimore.