Rent is a part of life. Some of us pay monthly rent for a place to live. But land owners also pay a “rent” in the form of property taxes. Think not? If you stop paying property taxes, see how fast your real estate become a no estate. Seventeenth-century Maryland landowners had an annual fee called a quit rent owed to Lord Baltimore. But even the colony of Maryland had an annual rent. A peculiar passage in the Maryland Charter specifies it,

“…yielding and paying therefore to Us, Our Heirs and Successors, two Indian arrows of those parts, to be delivered at Our said Castle of Windsor, every year the Tuesday of Easter week, and also the fifth part of all gold and silver ore…”.

It required only loyalty to the crown and the payment of “two Indian arrows of those parts. Indian arrows were readily available in the early colony, gold and silver not so much. The requirement was a very modest obligation, indicating that the King did not wish to impose a burdensome rent on Lord Baltimore. Nevertheless, it was a small but essential legal requirement for Lord Baltimore to keep his province. Did he pay it?

A group of documents in The Calvert Papers at the Maryland Historical Society shows that he did. These are receipts from officials at Windsor Castle certifying that they had received the rent of Maryland – two Indian arrows – for the year. There are gaps but the receipts span the period between 1633 and 1765. Delivery of the arrows likely continued until the American Revolution. The fact that 37 of the receipts have survived strongly suggests that the Lords Baltimore were very careful to meet this small but highly important legal obligation. The earliest arrows were delivered on the first Easter Week after the Charter was granted – 23 April 1633. A copy of the associated letter Lord Baltimore sent with the arrows also survives and it states specifically it was when “I sent my first rent of 2 Indian Arrows for Maryland”. They were delivered by Calvert’s trusted servant John Langford. A portion of that document is seen here, courtesy of the Maryland Historical Society. 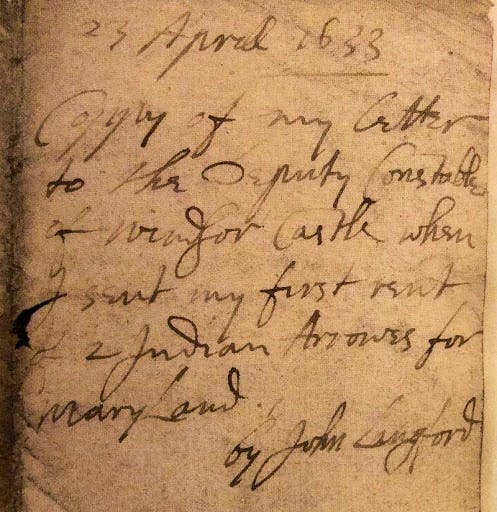 Cover of the Letter for the first delivery of Maryland’s Rent, 1633. Courtesy of the Maryland Historical Society, The Calvert papers, #841

Since Maryland had not yet been founded, it is unclear as to how Lord Baltimore obtained them. Being a careful planner, one strong possibility is that Calvert paid one or more captains of the Tobacco Fleet ships that sailed to Virginia in the autumn of 1632 to obtain some. They would have returned in the spring of 1633, in time for the delivery. While not from Maryland, the Chesapeake origin would have satisfied the requirement of them being “of those parts” of the world. On the other hand, he might have bought them from someone in London. Calvert does seem to have acquired a number of arrows because the second delivery of arrows to Windsor Castle was on 3 April 1634, just days after the founding of the colony. Later specimens certainly came from Maryland. A letter in The Calvert Papers from John Lewger in Maryland to Lord Baltimore in January 1639 has one passage regarding obtaining “Indian arrows.” It reads

“…for the arrows the Governor will take care, who hath all the commerce with them, & for my part I scarce see an Indian or an arrow in half a year neither when I do see them have language enough to ask an arrow of them…”

We do know that they were likely tipped with small triangular points made of quartz, as shown by this arrow point found by St. Mary’s City archaeologists. 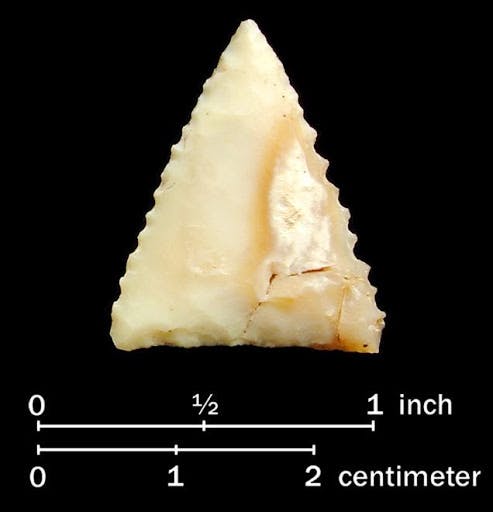 The Lords Baltimore need many arrows over time. If they were paid every year, there were 284 Indian arrows delivered to Windsor Castle in total.
Could any of them survive at Windsor? The Maryland Hall of Records Commission formally asked about that in 1938, writing to the Constable of the castle. They hoped to obtain some of these arrows for display. The answer came back from a Lord Wigram, the Deputy Governor of Windsor Castle who wrote

“A careful search has been made in the various Royal Palaces and I regret to say that no trace can be found of these old Indian Arrows which Lord Baltimore was required by the charter of Maryland, of 1633, to render each year unto the King at Windsor”.

He further stated that “In 1922 two modern Arrows were given to King George V by the members of The Society of the Ark and the Dove, and these are exhibited here at Windsor”. This letter was published in the Maryland Historical Magazine (1938, Vol. 33(3): 294).

But there have been more searches for the Maryland arrows. Around 2000, Curator Thomas Davidson of Jamestown Settlement was seeking Native American artifacts for the exhibit celebrating the 400th anniversary of Virginia in 2007. He also made inquiries at Windsor Castle about any “Indian Arrows” they may have. The answer was again negative. I also made an inquiry in 2008 with no results. We do not know what happened to the 1922 presentation arrows either. But there is one set of “Maryland Rent” arrows that do survive at Windsor Castle.

In the run up to the 375th birthday of Maryland, our museum mounted two reproduction arrows to ceremonially pay the Maryland Rent to her Majesty Queen Elizabeth II in 2008. I wrote and had the plaque prepared for this, which can be seen here.

To be as authentic as possible, the arrows were made from Maryland arrowwood, the points of Maryland chert, the feathers from a Maryland turkey, and the pieces assembled using the sinew and glue obtained from Maryland deer. These arrows were carefully mounted on a piece of fine, highly polished Maryland wood along with the brass plaque by HSMC’s late artisan, the exceptionally talented Peter Rivers. 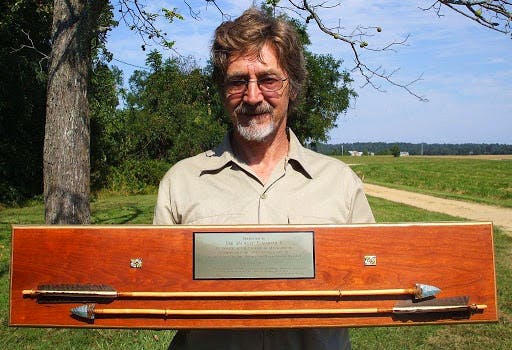 Then, during one of our Exploring Maryland’s British Roots tours in 2008, co-sponsored with Cole Travel, a group of 9 people including Calvert descendants and led by Maryland’s distinguished legislator John Hanson Briscoe entered Buckingham Palace and presented the arrows to a representative of Queen Elizabeth. Her thank you letter noted that she was very impressed by the high quality of the reproduced arrows. And I said at the presentation, “We are delighted that these Native American arrows will now grace the Royal Collection and hope they are a reminder of all that binds our two nations together.” 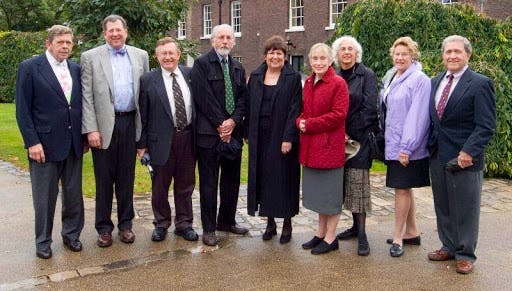 The Group who presented the Maryland Rent at Buckingham Palace

Maryland’s token rent of two arrows is unusual in colonial charters but was a key requirement for Lord Baltimore to keep his colony. It would be very appropriate for the annual rent to again be paid to the reigning monarch of Britain for Maryland’s 400th anniversary on the Tuesday of Easter Week, 2033, precisely four centuries after Cecil Calvert delivered those first arrows. In the meantime, I still hope that in the back of a closet, in an attic, or a corner of a forgotten dungeon at Windsor Castle, a worker will come across some of the “Maryland Rent” once paid to the crown.