Home › Dig Deeper › The Value of Where

The Value of Where

Archaeologists go to great lengths to record as they dig. This is because accurate data about when and where are key to answering the how and why. In this post, I would like to focus upon the value of where. We use grids to allow precise mapping and artifacts are labeled with the site and square numbers so the location of discovery can always be known. In many ways, the location of a find is as important as what was found or when it dates. Digging features (postholes, pits, cellars, fencelines, etc.) demands great attention so that the artifacts that were discarded together centuries ago stay together in the lab. By knowing that a group of items are found together, or in association, the well dated objects among them can allow the poorly or undated objects to be assigned to a relatively accurate time period. Hence, where something is found is a vital piece of evidence.

One of the most powerful examples of this came from a project conducted for St. Mary’s City by underwater archaeologist Scott Tucker for his doctoral dissertation. This story begins in the 1990s when James Embrey led an investigation that tried to establish where the shoreline of St. Mary’s City had been in the 17th century and how much was lost to erosion. He found that in most areas, only about 50 feet of erosion had occurred, much less than feared. In doing the research, Embrey identified a tightly clustered concentration of stones on the bottom. In the area of the stones were a few 17th-century bricks and tobacco pipe fragments, but these could have been washed into the area and were not necessarily connected to the stones. He collected a few of the displaced rocks and our esteemed geological colleague Dr. Gerald Johnson of the College of William and Mary believed that they were of European origin and likely ballast stones. They are seen here. 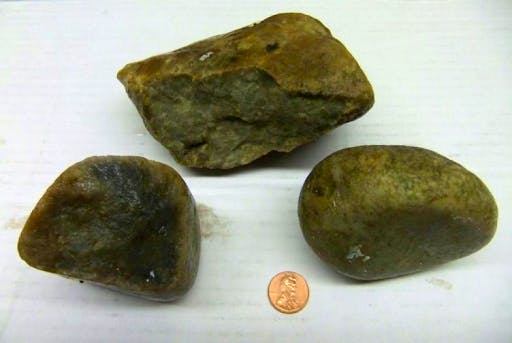 Scott Tucker, a graduate of St. Mary’s College and the HSMC archaeology field school, needed a dissertation project and learned about this underwater find. We worked out a research plan, a donor provided some funds, permits were secured, and equipment assembled. There were two phases to the project. Finding the stone concentration was attempted with side-scanning sonar but it was in too shallow a water for the vessel to examine most of the site. Probing through mud and oyster shells finally relocated the stones. Scott is seen here during the project. He has since been awarded his doctorate from the University of Southampton in England and now lives in Germany. 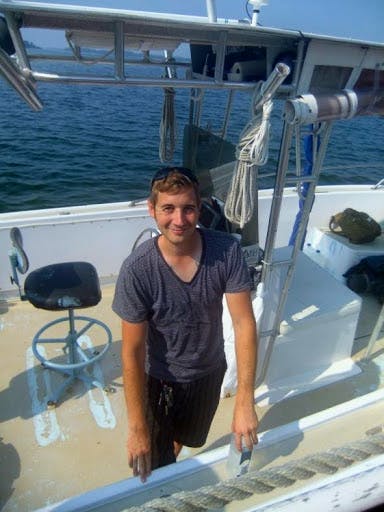 Squares were laid out in the area of the stones and underwater excavation was conducted. Unfortunately, due to the scattering of some of the stones by oyster dredging and thick oyster concentrations, it was hard to tell precisely where the site was and several of the squares missed it. But others successful came down directly on the stones as seen here. 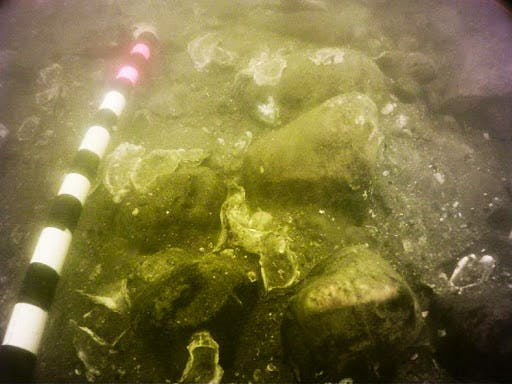 Tucker found that the stones appeared to be stacked, and one unit came down on the edge of the concentration which formed a straight line. This is the original field drawing of that square. 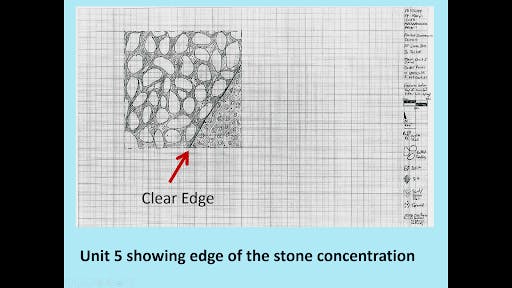 This was very important because if the stones were merely a pile of discarded ballast, we would expect them to be jumbled into a pile. The stacking of the stones, linear nature of the concentration (over 41 feet long and 12 feet wide), and straight edge implies that rather than a ballast dump, this is the remains of a ship that was run ashore. Metal detection found few artifacts and the location suggests that, instead of a ship wreck, it was a vessel that was at the end of its useful life. They ran it aground, all useful materials salvaged from it, and the vessel left to rot. Its value lies not in artifacts, which were mostly removed, but in what it can tell us about the vessel. Unfortunately, no hull sections were found in the testing, but those units were at the shallowest part of the site, where worms and other factors would have been most destructive. More excavation is needed.

The shores of the Chesapeake Bay are littered with abandoned vessels from the past, and this would seem to be just another one. But that is where careful archaeology and analysis change our understanding. Tucker had the stones analyzed by British colleagues and the conclusion is that the most likely source of the ballast was the west coast of England, near the important tobacco ports of Barnstaple and Bideford in Devonshire. This is a vital clue to the origin of the vessel. But when does it date? During the excavations, Tucker made one very important discovery. Wedged under the stacked stones was a sherd of pottery. It is known as North Devonshire Sgraffito Ware and the style of decoration dates it to the last quarter of the 17th century. It cannot have accidentally washed between the stacked stones. Knowing precisely where it was found is essential for telling us that this site and the stones date to the 17th century. 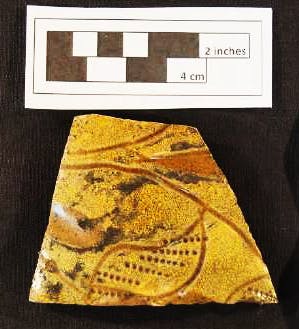 The time period and origin of the stones makes it most likely that what Tucker tested was one of the hundreds of English tobacco fleet ships that annually sailed for the Chesapeake to collect the crop in exchange for manufactured goods. Of those many vessels, this would be the only one known archaeologically. 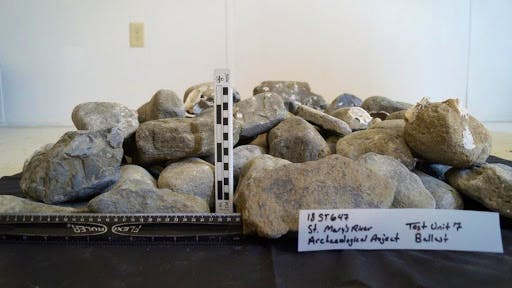 As seen here, the excavations retrieved over 200 of the stones and it is estimated that there is approximately 4.5 tons still at the site. We hope that funding can be found for a future project that explores the deepest portion of the ballast concentration, where the possibility for preserved hull remains is the greatest.

In the meantime, Tucker’s findings add a fascinating new dimension to our knowledge of early Maryland, and we want to share this story with school children and other visitors. To help us, a substantial contribution has been made by the Daughters of the Founders and Patriots of America to create a new exhibit station near the Dove dock. It will supplement the maritime history story with Tucker’s finding of the routes the Tobacco Fleet took and the underwater discoveries. The highlight of this exhibit will be allowing every student to hold a piece of 17th-century ballast that crossed the Atlantic in its final voyage to Maryland. This will provide a unique educational opportunity and a connection with the past. Of course, every 4th grader will assume pirates must have chased this ship, but we nevertheless hope it will be an experience they will long remember and link them to our maritime history. And the vital clue in all this is a single sherd of pottery, and our knowing precisely where it was found. “Where” is indeed a very valuable thing.