There are few non-archaeological objects that have survived from early Maryland. One that is of particular relevance to St. Mary’s City is an iron cross. It was long at Old Bohemia Manor at the top of the Chesapeake. Established in 1704, the manor developed into the principal Catholic school in Maryland, run by the Jesuits. It was the direct predecessor of Georgetown University. And among the individuals educated there were Charles Carroll of Carrolton, the only Catholic to sign the Declaration of Independence, Danial Carroll who helped write the U. S. Constitution and John Carroll who became the first bishop of the United States. The cross was recognized by the people at Old Bohemia as having an important Maryland history and it was used until 1898. Efforts by the Old Bohemia Historical Society restored the 1790s church and in 1964, had a copy of the iron cross mounted on a stone pedestal that marked the location of the original 1720s building that was a combination chapel/school/residence. This was necessary to meet legal requirements because mass could only be held in a domestic context due to penal laws. A photo of the monument is seen below. 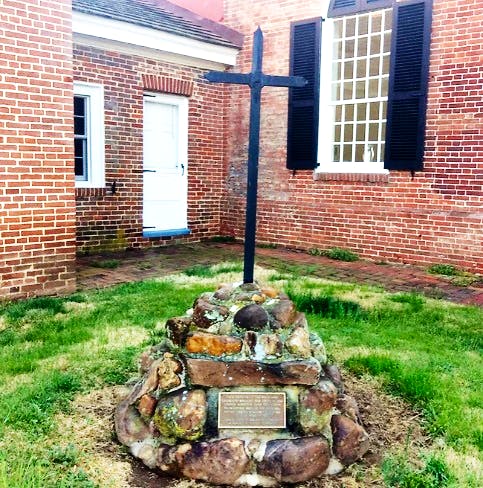 Local legend said that the cross was brought by Father Thomas Mansell from St. Mary’s around 1704. He had been sent by the Jesuit Superior Father William Hunter to found a new mission in the very sparsely settled Cecil County. Selection of this remote location may have been influenced by the anti-Catholic government of Maryland as well as its closeness to the new colony of Pennsylvania that did allow Catholic settlers. Beginning in a log cabin, the mission was successful and in the first half of the 18th-century developed into a brick chapel house and Jesuit school.

The first president of the Old Bohemia Historical Society was Francis W. Krastel, Sr. His son was Rev. Francis Krastel served St. Cecilia’s Parish in St. Mary’s City in the late 1980s and 1990s and delivered the dedication prayer for the beginning of the Chapel project in 1988. Father Krastel told me about the cross and related the traditions his father had learned, including that it had been at St. Mary’s City in the 17th century, perhaps even brought by Father Andrew White, and then taken to Old Bohemia. He speculated that it might have been used on the 1660s Brick Chapel. Due to the close association of the Old Bohemia school with Georgetown University, the original cross was given to Georgetown in the late 1960s. Below is a picture of Francis Krastel Sr. holding the original cross in a c. 1960 photograph. 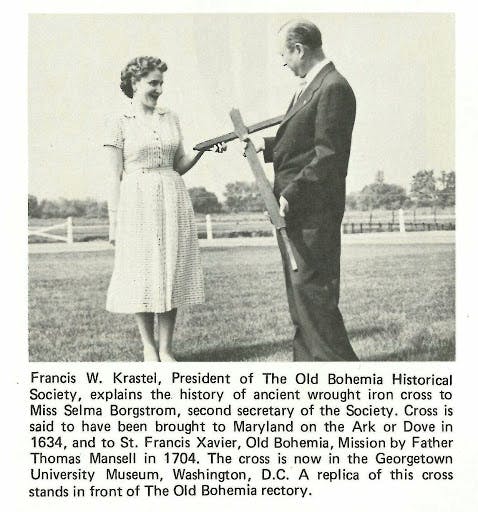 As you can see, it is a Latin cross with a socket base for mounting. The cross stands four feet high and is two feet across and made of wrought iron. It weighs about 24 pounds. The base form is strong evidence that it was not meant to be hung but rather mounted on to something. Following its arrival at Georgetown, the cross was forgotten about, disappearing into the collections room until 1989. In that year Father Ronald Murphy, the Rector of the Jesuits at Georgetown and Professor of German made a casual, unplanned stop at Old Bohemia Church and saw the mounted cross with a plaque. It told that this was a replica of the cross brought by the first settlers from England on the Ark and Dove. It also said the cross had been at St. Mary’s, then taken to Bohemia Manor and was now at Georgetown University. Yet he had never seen nor heard of it there. This prompted a search and Father Murphy literally stumbled over the box that held the cross, laying on the floor in the Archives storage room.

On the back side of the cross he observed that there were two inscribed verses, dated 1862. One said “This cross is said to have been brought by the first settlers from England to St. Mary’s.” On the crossbar there was a Latin inscription,“Ad perpetuam rei memoriam” which translates “For the eternal memory of this event.” In 1862, Old Bohemia church was being served by Rev. George Villigers S.J. and he oversaw the building of a vestibule tower with a bell on the front of the existing 1793 church. To construct it, any cross at the peak of the front gable on the church needed to be removed, and this probably accounts for it once again being accessible. Father Villigers may have been the person who etched the two versus on the cross. An image of some of the verses is shown here. 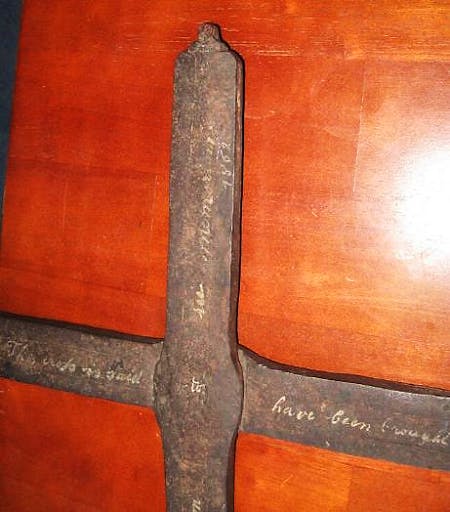 Some of the inscriptions on the back of the cross. Photograph by Father Ronald Murphy, S. J.

The association with Father Andrew White is not clearly established. Several surviving items have been attributed to White, including a chalice and the Carroll Family tabernacle. However, this wood tabernacle would have been in the first wooden church White built in the 1630s. Because that church was burned down by Richard Ingle in his surprise attack of 1645, as confirmed by archaeology, it is highly improbable that a wood tabernacle would have survived such a conflagration. Hence, its association with Andrew White is unlikely but one with the Brick Chapel is more plausible.

Perhaps the iron cross was given the same attribution. The statement reads “This cross is said to have been brought by the first settlers from England to St. Mary’s. It could have been part of the items the Jesuit’s carried with them on the founding voyage and used on the first wood chapel. We cannot evaluate the veracity of that. But the legend does associate the cross with St. Mary’s City. Its size is appropriate for a building like the chapel. The taking of it to Old Bohemia in the early 18th-century corresponds with the locking and then dismantling of the Brick Chapel at St. Mary’s. We know that nearly all of this building was recycled and a durable cross being taken to a newly established mission/school is feasible.

Father Murphy has proposed that the cross was brought by Andrew White and it was made on the voyage to Maryland. He suggested it was made of ship’s iron. Consultation with the Dove captain William Gates confirms that such iron straps were taken on vessels, although they were also common stock used by blacksmiths during the period. Gates notes that it was both riveted and partially heat welded. Such an item could have been made during the voyage but it is equally possible that a blacksmith made the cross on land. There is really no scientific way to determine more about its manufacture or precise date.

Let us go back and examine the main inscription on the cross “This cross is said to have been brought by the first settlers from England to St. Mary’s.” This would seem to reflect a long-held tradition at Old Bohemia that was finally written down in 1862, most probably by Father Villigers. The legend says it was brought from England to St. Mary’s. But what does “the first settlers” refer to? Tradition held that it came on the Ark and the Dove and from that attributed to Andrew White. An early date was accepted. But was it necessarily 1634? Considering the perspective from 1862, could it mean the early colonists to Maryland, not specifically those of 1634? Is it possible that a cross dating to the 1660s would be attributed to the first settlers 200 years later? Beyond a 17th-century date, it is not possible to reach any firm conclusion on this matter.

The size and form of the cross does suggest that it was intended for a church. A small cross of metal is regularly found at the peak of the gable over the entry of Jesuit churches. These are never crucifixes with the body of Christ but a simple cross. Some examples are provided below from different parts of the world. Note that the scale of the cross is small in comparison to the mass of the structures. Given this strong pattern, we can predict that the brick chapel in St Mary’s City would have displayed such a cross. And the socket on the Old Bohemia specimen would have facilitated such an attachment. Give its size, the fact that the cross was taken to Old Bohemia during the same period when the Brick Chapel was being dismantled and recycled, and its direct association with St. Mary’s in the legend, it is a reasonable to conclude that this iron cross was the religious symbol that capped the Jesuit Chapel of St. Mary’s. 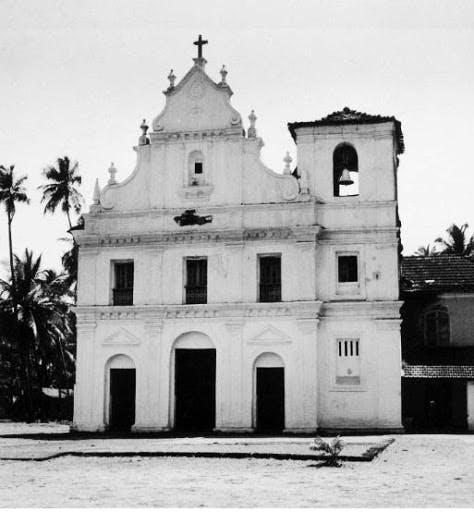 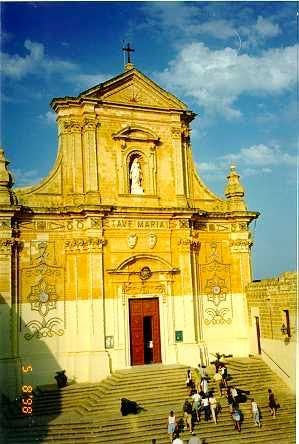 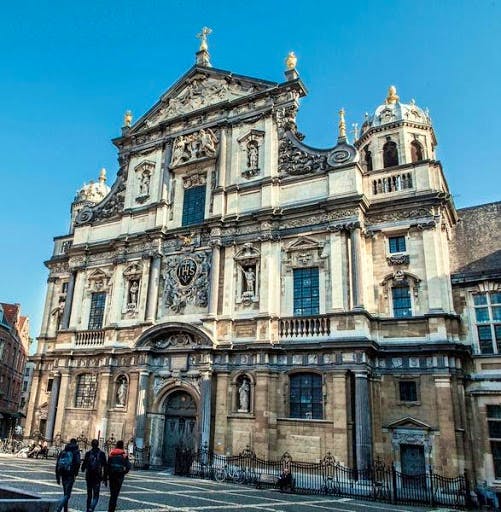 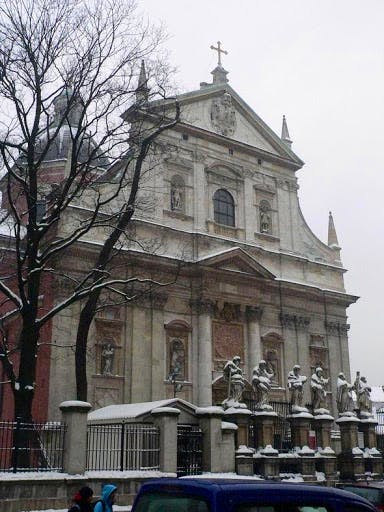 A small cross is consistently found at the peak of the main façade on Jesuit churches both large and small. These 17th-century examples are in Goa, India, Malta, Antwerp, Belgium, and Cracow, Poland.

Therefore, we measured the Old Bohemia cross and took notes on its construction. The sparse evidence led us to conclude that Father Krastel’s suggestion two decades earlier that the Old Bohemia cross was connected with the St. Mary’s Chapel is correct. Therefore, Mr. Peter Himmelheber, a St. Mary’s County resident and renowned HSMC volunteer with fine blacksmithing skills, fabricated an exact copy for the chapel. As the brick construction was reaching its conclusion, Peter, master mason Jimmy Price and an assistant mounted the reproduction cross at the top of the chapel façade, as seen here. 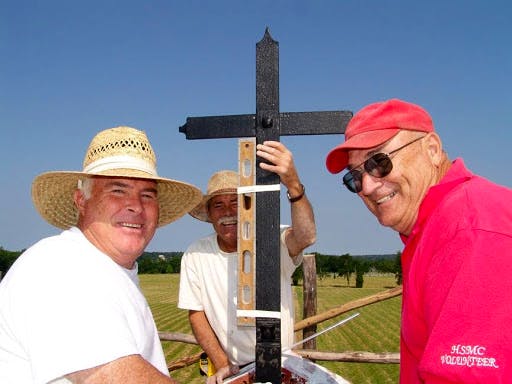 Mounting the Iron Cross on the Chapel Reconstruction, 2007. From the Left, Jimmy Price, Jerry Campbell, and Peter Himmelheber.

The original cross has since been used in a special mass when Pope Francis visited the United States in 2015, and Father Murphy later brought the cross to a Maryland Day celebration at St. Clements Island. He deserves much credit for working to have the historical significance of the cross recognized. This image shows Father Murphy holding the cross at Georgetown University with the full engravings visible. 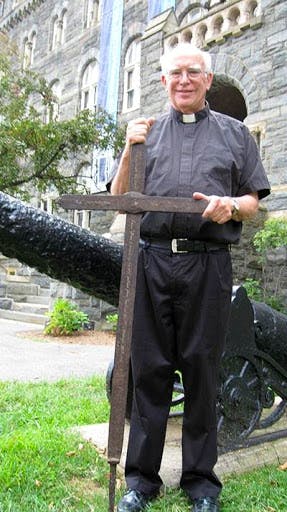 Given the minimal historical evidence about the Brick Chapel, every clue is valuable and must be followed. Legend and tradition make up some of these clues and help track down possible surviving pieces of the first major Catholic Church in English America. The cross seems to be one of these. Today, a cross of the precise same shape and size as the original may be seen at the peak of the reconstructed chapel. This reconstruction returns to memory some of the earliest efforts to establish religious freedom in America and Liberty of Conscience in the world. Thus, the words expressed by Father Villiners over 160 years ago are still relevant, for the cross is an object with a unique history that continues to serve “For the eternal memory of this event.” 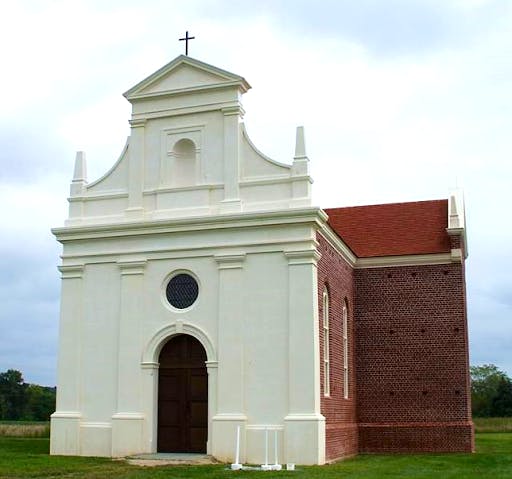 The Reconstructed 1660s Chapel at St. Mary’s with the Old Bohemia Cross that was probably on the original building prominently displayed at the top the front façade.