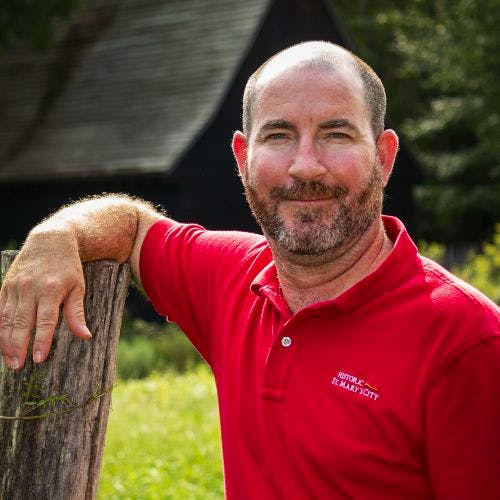 Peter Friesen received his Bachelor of Arts Degree from New Mexico State University, focusing on History with a minor in Anthropology. He went on to receive his master’s degree in public history in 2006.

During his senior year at NMSU Peter decided to focus on a career in living history. He took an internship at Valley Forge National Historic Park, where he interpreted in 3 rd person, did black powder demonstrations, helped the archaeologists dig, and manned the visitor center desk. After graduating, Peter decided to attend graduate school and focus on public history. While there he took part in a class called Time Traveling where he learned about first person interpretation. His degree plan included a research paper of journal length and quality and several hours interning at the Smithsonian Folklife Festival assisting the supply coordinator. His research paper titled Hemp, History and Museums, looked at how marijuana laws have affected public perception of hemp and how it is interpreted in living history museums. This led Peter to Colonial Williamsburg where he worked for two years finishing his research and completing a master’s degree. During this time, he started to look for a living history museum that also incorporated agriculture, which is how he came to be at HSMC. After his first year at HSMC, he received the New Professional Travel Award for the National Council of Public History’s annual conference in Louisville, KY where he presented his research on Hemp and Museums. Peter has continued his agricultural research to include tobacco, apples, livestock, and other aspects colonial farming life.

Peter is also active in the larger museum profession. He has presented at several conference and is currently on the board of directors for both the Association of Living History Farm and Agricultural museums and the Patuxent River Naval Air Museum. Peter also serves on the museum studies steering committee at St. Mary’s College of Maryland as well as teaching museums studies.