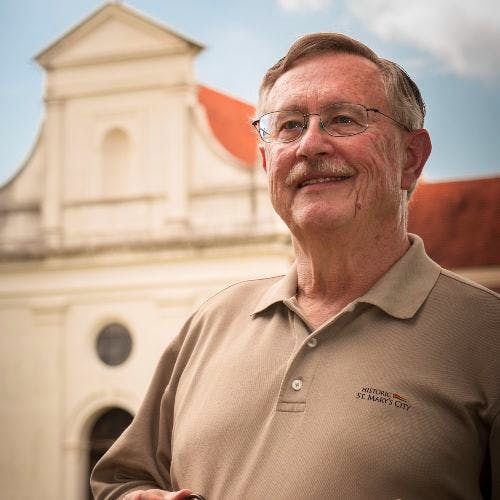 Dr. Miller is an archaeologist who grew up in Arkansas and attended the University of Arkansas where he received a B. A. degree in Anthropology. He subsequently received an M.A. and Ph.D. in Anthropology from Michigan State University with a specialization in historic sites archaeology. Miller‘s dissertation was the first major study of the human diet in the colonial Chesapeake, as revealed by documents and the analysis of animal bones. His first contact with St. Mary’s City came in 1972 when he was hired as an archaeological excavator.

After several additional summers excavating and conducting analysis, Miller was employed full time by HSMC in 1977, first as Laboratory Director (1977-1987) and from 1987 to 2015 as Director of Research. Currently, he holds the position of Maryland Heritage Scholar and in 2011-2012 was Visiting Fellow at the Centre for Medieval and Renaissance Studies at Oxford University. In 1997, Miller served as President of the international Society for Historical Archaeology, and chaired the the SHA Ethics and Standards Committee, the Government Affairs Committee and Curation Standards Committee, which developed the first professional standards for the care of historic archaeological collections. Research interests are wide ranging and include foodways and colonial architecture, artifacts such as ceramics tobacco pipes and oyster shells, environmental studies, changing landscapes over time, and the intellectual influences that shaped Maryland and its founders.

Much of Miller’s career has been devoted to exploring seventeenth-century and early eighteenth-century sites and the effective conversion of those many discoveries into exhibits for the public, including galleries, full reconstructions, and Living History sites. These include exhibits at HSMC, Jamestown Settlement, Colonial Williamsburg, the Maryland Historical Society and the Smithsonian Institution. In 2020, Miller received the prestigious J. C. Harrington Medal, the top international award for scholarly contributions to the field given by the Society for Historical Archaeology.