Many buildings have been encountered during the archaeological explorations of St. Mary’s City and many more remain to be discovered. Determine their date and purpose can be challenging, especially for outbuildings around which artifacts tend to be far less abundant than with dwellings or kitchens. A good problem case in this regard comes from the St. John’s site.

Archaeology in 1973 included the uncovering of a large area of the backyard at the site with a road grader, a popular approach at the time. We no longer use this method, sometimes called “The Virginia Trowel” because it was soon after realized how important the artifacts in the plowed soil are for understanding a site. While cleaning the newly exposed soil surface, it became immediately obvious that the area contained many archaeological features. One turned out to be a privy, another a large trash pit and there were many postholes. Work proceeded to map and then excavate the varied features. The picture below shows the result in 1974, with the half excavated privy on the lower left, the partially dug trash pit on the upper left, the group of postholes and long trenches of former fences. 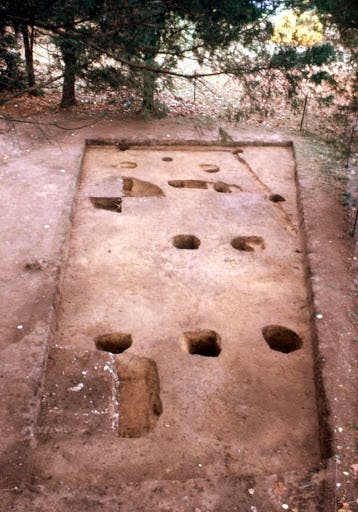 Picture of the features in the backyard of St. John’s, looking West. 1974.

Mapping the features suggested the outline of a building. The image below is the archaeological map, showing the features with north at the top. Interpreting this map allowed us to propose that the structure was a three walled shed that was open on the south side. A buried sheep was uncovered nearby and it seemed reasonable to conclude that this might have been a shed for sheep. 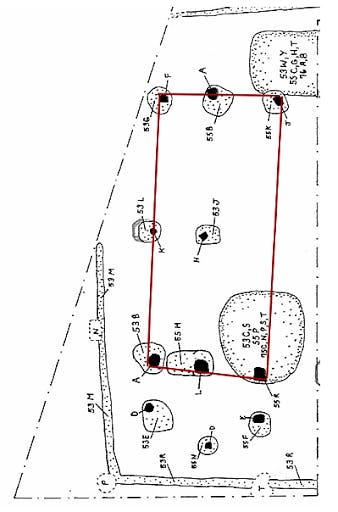 Map of the area showing the possible outline of the shed.

The map also helped give us a rough date. One of the post intruded the edge of the Privy (53 W,Y, 55 C, G etc.) showing it was build after the privy was filled up. That would put construction in the 1650s. At the other end, the top of the pos thole was cut away by a trash pit (53 C, S, 55 P, 75 C, etc.) that dated c. 1690. Thus, the structure had to date between the 1650s and the early 1680s. Notice also that there were long fence trenches on the left, top and right sides of the building, further implying some type of animal enclosure.

This understanding prevailed from the late 1970s to the early 2000s. New excavations beginning in 2001 would change things. That year, work began at St. John’s to clear areas for the construction of a new exhibit building. Supervised by Ruth Mitchell, this involved work in varied locations where the foundations of the new structure would be laid and that included the backyard. As excavators carefully removed large swaths of plowed soils and screened them, new features were uncovered, including more postholes. The picture below shows some of these post holes being excavated in 2003. New evidence showed our original interpretation had been wrong because it was based upon an incomplete data. 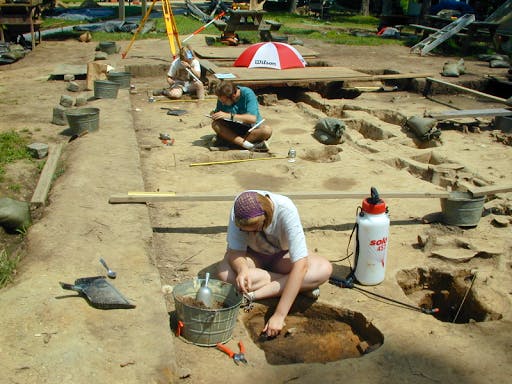 Excavating some of the postholes of the backyard building at St. John’s in 2003.

The 1970s work had only uncovered a little over half of the structure and there were two more lines of additional posts. The new map here shows the new postholes. 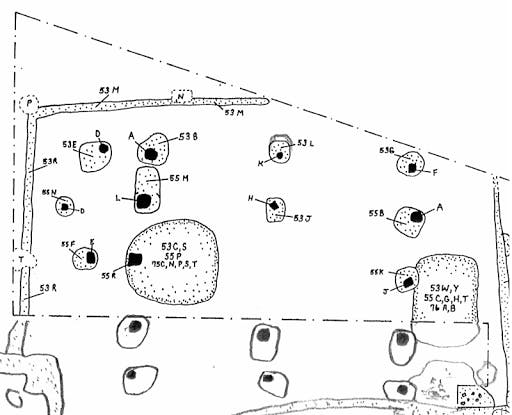 Instead of an open shed, it was actually a full building made up of four lines of postholes. The building actually consisted of 14 posts that formed a 20 foot long and 17.3 foot wide structure. The interior posts were larger and deeply set nearly three feet into the ground. In contrast, the outside lines of posts were only about one and a half foot deep. Amazingly, several of the deep central posts still had fragments of wood surviving. Samples were sent to wood experts at the Forestry Products Laboratory and they identified them as Black Locust. This is a wood know for its durability in the ground but it was still a surprise to find some of it still there after 300+ years.

The overall outline of the building is shown in the next figure. It had a large open central area 20 feet long and about 10 feet side. On the north and south sides were smaller spaces a little over three feet wide. It is unlike any other building yet found in colonial Maryland and prompted me to conduct wide ranging searches in the architectural literature and consulting with other archaeologists. 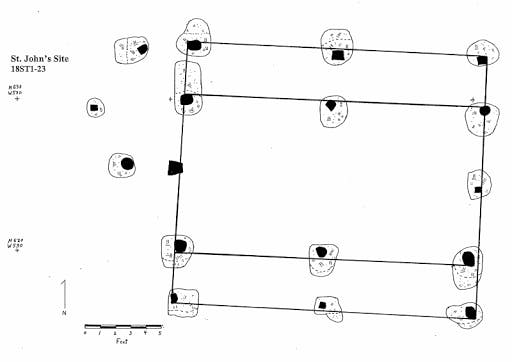 Outline of the Building after all its posts were uncovered.

There were no direct parallels in the English literature, although it must be recognized that such small outbuildings are not always well documented. One suggestion came from a specialist in Colonial Dutch archaeology, Dr. Paul Huey of Albany, New York. He said it resembled Dutch architecture. Pursuing this idea revealed examples of Dutch houses and agricultural buildings in the Netherlands and Dutch America, as seen here. Aisled buildings were common among the Dutch and the plan of this building implied a Dutch influence. The main difference is that the St. John’s example was much smaller and is an earthfast building instead of one resting on masonry foundations. 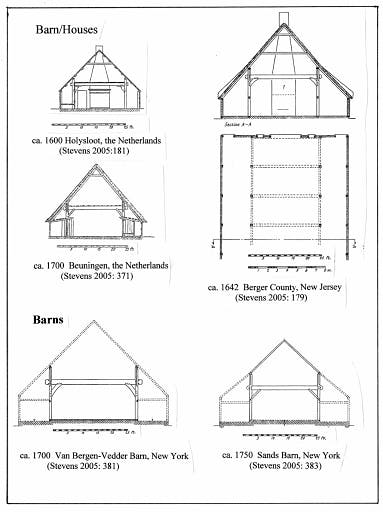 Dutch Buildings constructed with side aisles

This then raises the question of who built it. A post-c. 1650 date seems secure. There are relative few artifacts but those that were found in the fill of the post holes (tobacco pipes, some bottle glass) point to the mid-17th century. It was during the 1650s that Dutch merchant Simon Overzee lived at St. John’s. He did considerable alterations on the property, probably built the “quarter” in the front yard of St. John’s, and turned Lewger’s storage building into a kitchen and servant housing. It seems likely that he also had this aisled building erected in the mid- to late-1650s.

But what was it for? As noted, there are relatively few artifacts that can be directly associated with the building. Some trash was already present when it was built and by the later 17th-century, this area was at the edge of the major garbage dump for the house. Not surprisingly, nails are some of the most common artifacts, along with many small fragments of brick also found in the vicinity. There is no archaeological evidence that the structure was ever heated (such as a chimney base or fire altered soil) and the brick does not seem to have any connection with this wooden building. Hence whatever activity occurred here, it did not involve the use and discard of lots of artifacts.

A livestock building was a possibility, as indicated by the original sheep shed hypothesis. However, the three feet wide aisles could not have held horses or cattle and it would be tight for even a small flock of sheep. Garry Wheeler Stone, who first found the structure, suggested another possibility. Could it have been a poultry house.? With this scenario, the three-foot wide aisles would have held the roosts for the chickens. Most chicken houses noted in the architectural literature are rectangular or square in shape, without such aisles. But this seemed a good hypothesis and when all the site data is combined, it shows a building that was surrounded by a fence enclosure that could have provided a measure of protection from foxes and other predators. But a chicken house would by its nature leave few artifacts an archaeologist could find to prove such a hypothesis. Was there any other way to test this idea?

Besides eggs, one thing chickens do produce lots of is manure or litter. It is high in Nitrogen, Phosphorus, and Potassium and could perhaps leave a chemical signature in the ground. On the other hand, Nitrogen is a highly mobile chemical and potassium can leach away, so they would not be good markers. But phosphorus tends to remain in the soil. All of St. John’s has been plowed for two centuries, so where would such a soil sample be found? The only possible place would be the holes that opened up when the wooden posts were pulled out to demolish the building. The preserve wood found in a few of the posts seems to represent the very bottom of the posts that may have broken off in the pulling process. Into the newly created holes adjacent soil would then wash and thus represent the original soil in the vicinity. No soil samples were taken from the post molds dug in the 1970s but we were able to sample four of the newly found ones while they were being dug in 2003. For comparison, we also took soil samples from 25 other postholes around the site, including those from buildings and fence lines. These were submitted to soil scientists at the University of Delaware for testing. The results show that the mean for the 25 posts around the site was 60.8 milligrams per Kilogram (ml/Kg). In contrast, the four posts from the aisled building averaged 96.8 ml/Kg and the highest was 139.8 ml/Kg. Hence, the soils from the aisled building posts have a significantly greater concentration of phosphorus. Such a finding supports the hypothesis that this unusual building served as a chicken house.

This is the oldest poultry house known in Maryland and a very weird piece of architecture for the Maryland colony. It is likely Dutch inspired and built by Dutch merchant Simon Overzee. After his death in 1660, it became Governor Charles Calvert’s chicken house and then was used by the innkeepers that followed. Sometime in the 1680s, it was apparently in a decayed state and taken down. But within it and in the surrounding fenced enclosure, chickens had apparently been kept for many years at the St. John’s plantation, providing eggs and meat for the residents. 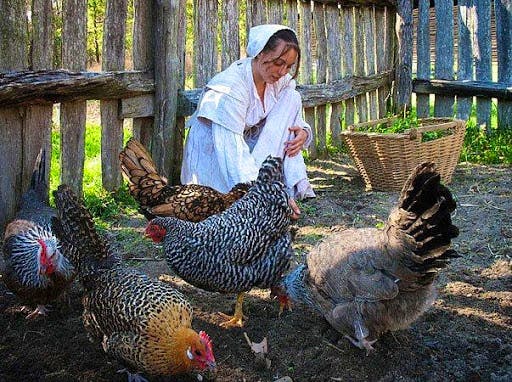 Our understanding of this17th-century building has changed greatly over the past 40 years. Originally thought to be a sheep shed, archaeologists did not fully uncover the structure until 2003. It remains one of the few examples of Dutch-inspired architecture found in early Maryland. And it was only by the application of modern soil science that we could finally decipher its actual purpose and resolve another mystery of Maryland’s first city.