Tales of the Dunghill Fowl

One important animal the first settlers brought to Maryland was called dunghill fowl. They were a mixed breed of chickens and so named because in Britain they could often be found on the manure or dung piles looking for food. They forged over plantation fields, yards and gardens, serving as a useful means of controlling some pests. Garbage middens near the plantation house would have been one place they could often be found looking for food, as seen here. 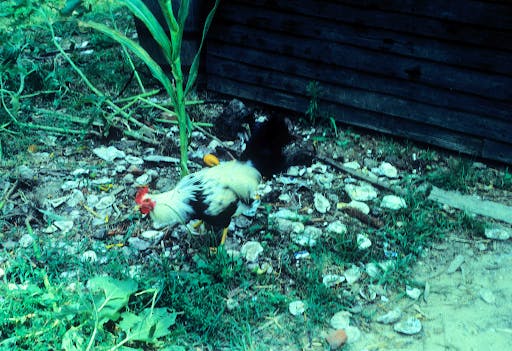 A Dunghill Fowl searching for food in a garbage dump

They generally found their own food, except perhaps in the depths of the winter. But one time the dunghill fowl would have been close and almost underfoot is during the regular household chore of pounding corn into cornmeal and sifting of the meal, during which bits of corn fall to the ground. As proof, I show our effort to reproduce this activity at the Godiah Spray Tobacco Plantation; it attracted every chicken in the flock, as shown below. 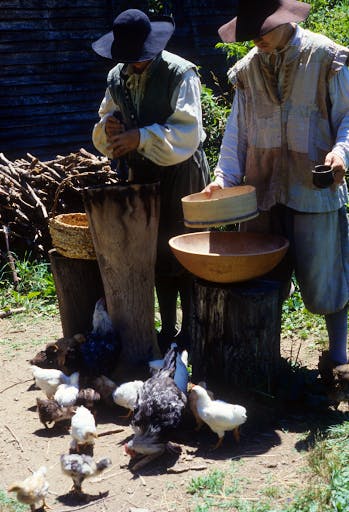 Pounding and sifting corn at the Godiah Spray Plantation, an activity that always attracts the chickens

Some of the earliest household inventories from Maryland list chickens. One of the oldest is for a John Bryant who died in April of 1638 owning “1 cock and 1 Henne” valued at 15 pounds of tobacco. Elite planter Robert Wintour died later that year in possession of “17 poultry” worth 124 pounds of tobacco and two years later, Henry Crawlie died with “2 cocks & 2 henns” valued at 60 pounds. Chickens apparently thrived in the colonial setting, so successfully that in the second half of the 17th-century, inventory takers seldom bothered to list them. In part this is because 17th-century chickens could generally feed themselves and the hardy dunghill fowl could still fly short distances, allowing them to escape from many predators; however, foxes were apparently still a threat and this prompting chicken houses to be located near the dwelling. Proof of this success comes from a letter Secretary of State John Lewger wrote to Lord Baltimore in January of 1639. In it he said that “And as for poultry I can at this present out of my owne stock furnish your Lordship with 50 or 60 breeding hens at any time”. Chickens obviously adapted very well to the new environment of frontier Maryland.

Chicken were first domesticated in Southern China and Southeast Asia more than 6000 years ago and were gradually carried westward. The oldest found in Britain date to about 400 B.C. and were considered sacred animals, not eaten. This change with the Romans in the early 1st century A. D. who consumed the species and may have invented the omelet from their eggs. Usage continued through the medieval period and into the 17th century. Farm wives typically managed the poultry and selling eggs and some chickens became a useful source of household income. Here is a drawing of an early 17th-century English woman carrying two chickens and a basket of eggs and vegetables from her farm to sell at market.

English cookbooks of the period include numerous references to chickens and eggs. One of the most popular was Gervase Markham’s The English Housewife, published in multiple editions between 1615 and 1631. It gives instruction for cooking chickens by boiling, frying and roasting, as well as baking a chicken pie. Eggs were the core ingredient in Fricassees and Quelquechoses, made with multiple eggs and a selection of meats or other ingredients in a fry pan. Numerous other recipes are given from pancakes to puddings that included eggs. One example of an egg dish is what we might call 17th-century style “French Toast”. As is typical for period recipes, you have to guess at the quantities of spices and most ingredients.

To make the best Panperdy

To make the best panperdy, take a dozen eggs and break them, and beat them very well, then put unto them cloves, mace, cinnamon, nutmeg, an good store of sugar, with as much salt as shall season it, then take manchet [bread], and cut into thick pieces like toast, which done take your frying pan, and put into it …sweet butter, and being melted lay in your slices of bread, then pour upon them one half your eggs, then when that is fried…turn your slices of bread upward, and then pour on them the other half of your eggs, and so turn them till both sides be brown; then dish it up, and serve it with sugar strewn upon it.

Archaeology has produced extensive evidence for the presence of chickens. I identified bones of this species on most 17th-century sites in both Maryland and Virginia. They indicate a mix of older mature birds and younger individuals we would call “fryers” today. Occasionally, turkey bones have also been identified but I cannot tell whether they are wild or domestic birds. Very rarely a domestic goose bone is found but they were not common in 1600s Maryland. Colonists also ate a variety of wildfowl including Canada Goose, Canvasback, Mallard, and Redhead Ducks, and Blue and Green Wing Teal.

More frequent than chicken bones are fragments of their eggs. Egg shell fragments appear in the early deposits at St. John’s and in the fill of the 1640s Pope’s Fort moat, as well as in most later pits. The most impressive find from the 17th-century at St. Mary’s City came about by accident in 1977. St. Mary’s College was cutting a trench for a television cable running to the old Anne Arundel Hall and it hit artifacts. HSMC archaeologists were called in, evaluated the situation, and determined that an emergency excavation was required. Gordon Fine was the assigned excavator and he uncovered 17th-century brick, part of a candle stick, bones and an upside down pot, as seen here. 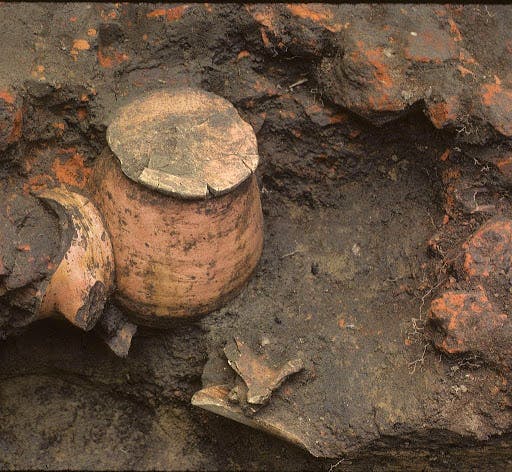 It was a pitcher made by Maryland’s first European potter Morgan Jones between c. 1661 and the 1680s. The handle had broken off long before and those edges showed wear, indicating people had continued to use the vessel. We propose it served as a kitchen slop jar because of the contents. Inside were many fragments of egg shell and a mass of broken stacked eggs seen in this picture. They had survived intact due to the protective cover given them by the upside down pottery vessel. 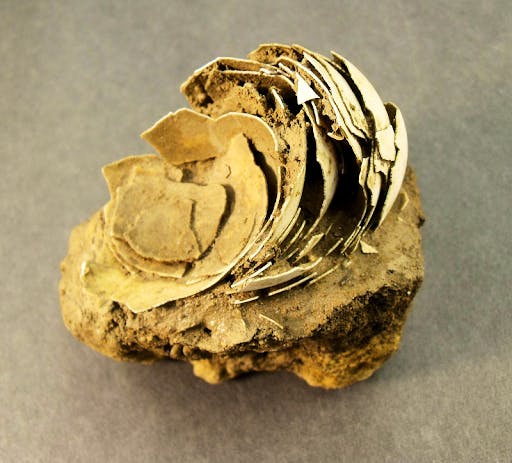 The cluster of eggs found in the broken pitcher

Looking at the cluster from above shows that at least 6 eggs had been broken and the half shells neatly stacked together before being thrown into the old pitcher. In terms of size they are similar to the medium to small eggs we purchase at the grocery today. 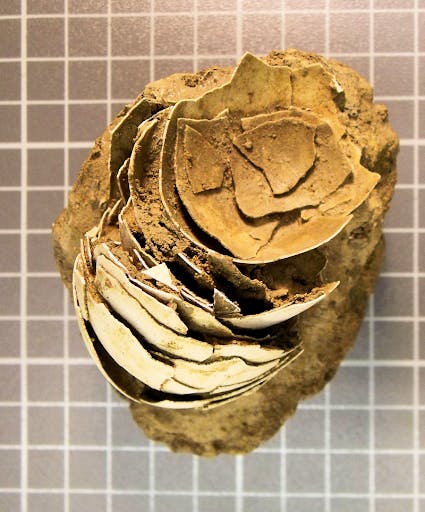 What I found so touching about this is that a seventeenth-century resident of St. Mary’s City had taken eggs, broken them and then stacked the shells in precisely the same way I had done a few days before in my kitchen. I bet you have done the same thing. It shows such a simple but undeniable human connection with those people we are studying, despite being separated by more than three centuries of time.

Twenty years later, archaeologists found another deposit of eggs. Excavations for the college next to the old Margaret Brent Hall uncovered a buried ravine that yielded quantities of 18th-century artifacts. Among these were bottle seals dated 1767 which told us much of the filling occurred in the last quarter of the 1700s. Excavator Robert Bray’s trowel hit something white. He meticulously began removing more and more of the soil and it became obvious that he was making a very unusual discovery. We had had found buried chicken eggs. This picture shows them as they were first exposed. 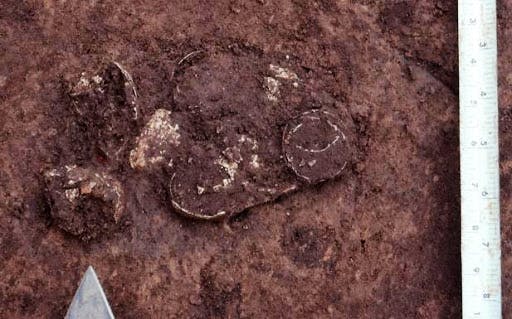 Conservation was essential and after careful work, the eggs were consolidated to remain as intact as possible. Over time, cracks had developed in the eggs that allowed soil to gently sift into the empty interior spaces. The tops had partially fallen in but most of the eggs retained their original shapes. Some shell was broken off in the initial uncovering and some had been damage by collapse and root action, but for 200+ year old eggs, they are in rather remarkable shape. There were seven eggs laying together in a tight cluster. They are seen here after the stabilization process, in a photo taken by Donald Winter. 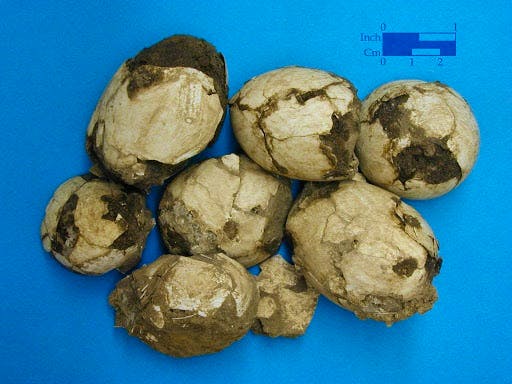 The eggs after undergoing conservation. They were laid around the time of the American Revolution

The immediate question is why were they there? The tight clustering suggests that they were a clutch of eggs laid by a hen over a week or so of time in a nest the hen had prepared. Chickens generally lay one egg a day, hence the week estimate. After this, a hen can “Go Broody” by sitting on the eggs for 21 days and nights to incubate them and allow the baby chickens to hatch. The location in the ravine may have been somewhat sheltered and the hen thought it a safe place for brooding. But something happened around the time of the American Revolution. Did a dog or fox kill the hen, or was she slaughtered for the table? Or did a major storm wash soil over them and prevent access by the hen? We will never know why but her eggs were abandoned and erosional soil covered the clutch, burying them for the next two centuries. It is certain that the hen who laid these eggs was still called a dunghill fowl because that is the name used for chickens in the first American cookbook, published in 1796.

These are most rare archaeological finds and they give us the first solid evidence about the size of colonial eggs and attest to their role in cooking. Dunghill fowl were one of if not the earliest European animals introduced to Maryland and they have been a part of the St. Mary’s City environment ever since. Chickens were a small but central part of the colonial diet, probably valued mostly for their eggs. They continued to be raised by farm families over the following centuries. Today, you can see colonial type dunghill fowl at the Godiah Spray plantation. But families following the traditional practice of raising chickens for their households came to an end at St. Mary’s City at the turn of the 21st century. Edith and Stephen Bean raised them on their farm along Rosecroft Road near the museum visitor center and sold extra eggs to locals, including this writer. When Edith moved away, family chicken keeping on the lands of Maryland’s first capital ceased for the first time in nearly 375 years. The sounds of dunghill fowl cackling and crowing which was long a ubiquitous part this rural landscape are heard no more. But archaeologists with their trowels regularly encounter traces that attest to their long presence at this place and their role in colonial life.